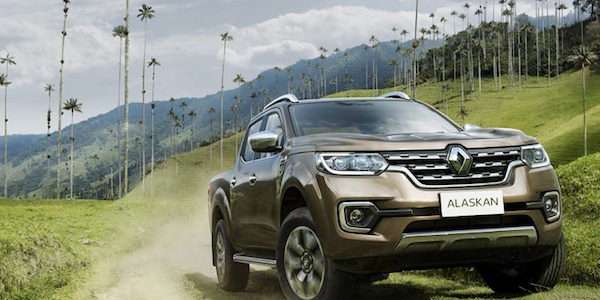 Is the new Renault Alaskan a preview of the next-generation Nissan Frontier?
Advertisement

It’s ironic that a pickup named Alaskan will never see US shores. It’s the new pickup from Renault that could be a preview of the next-generation Nissan Frontier. It will be launching in Asia, Australia, Africa, and in some European countries early next year. It’s based on Nissan's Frontier-sized Navara. We won’t see it on US shores, but it gives mid-size truck buyers an idea of what to look forward to.

The current Nissan Frontier is the oldest midsize truck in the US on its current platform and it’s badly in need of an update. Enter the Alaskan. It’s a preview of what could be the coming to the next US-spec Nissan Frontier mid-size pickup. Engine offerings will change, but the platform and exterior styling could look very similar.

The Frontier’s external design language has had minimal changes over the last ten years. The Alaskan looks good compared to the outdated Frontier. What’s underneath the hood? Depending on the market, the Alaskan is powered by a 2.5-liter gasoline four-cylinder engine rated at 160 horsepower, or a 2.3-liter twin-turbocharged diesel four-cylinder available in either 160 or 190 hp versions.

Rear-wheel-drive and an updated six-speed manual transmission come standard, while the list of options includes both four-wheel-drive and a new seven-speed automatic. Towing capacity comes in at around 7,700 pounds.

Now that Nissan is launching the new Titan XD full-size pickup, it’s time for the Japanese automaker to update the Frontier. Sales of the Renault Alaskan pickup will begin in Colombia, with other South American markets to follow as well as South Africa. While the French-badged Alaskan won’t be coming to US shores, it’s a preview of the next-generation Nissan Frontier. Stay tuned.