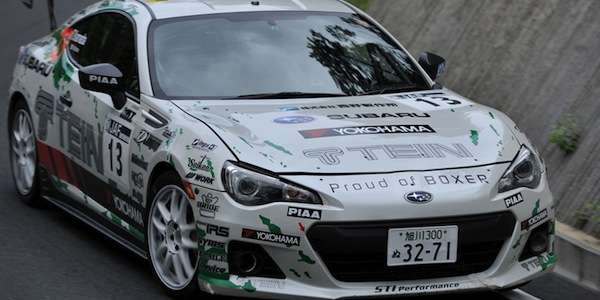 The Subaru BRZ is making a name for itself at the All Japan Rally Championship. Is BRZ the ideal track car?
Advertisement

It’s round six of the All Japan Rally Championship and the new 2014 Subaru BRZ is tearing it up in the race series. This weekend at "Tango Peninsula Rally 2014" the Subaru BRZ won its 3rd straight race in the All Japan Rally Championship series. The Tango Peninsula is one of the most scenic spots in Japan, but it didn’t distract driver Kamata Takuma from running another great race.

There are 21 stages for a total of 102.28 km of rally racing through the forest roads on the Tango Peninsula. It was fierce battle all weekend long for the top spot and the BRZ came out on top again. The heat played a factor in the August race and the cars and drivers were put under extreme conditions. The rain was a factor also but Takuma was able to keep the pedal down in spite of the wet conditions.

BRZ may be the ideal rally car

The Subaru BRZ may be the ideal rally car in spite of being only rear-wheel-drive. It features a near perfect weight balance and the the two-door sports coupe has an ultra low center of gravity. This allows BRZ to be pushed hard through the corners in wet or dry conditions. The driver can stay in control and still push the car to its limits.

The Subaru brand has deep rally roots that go all the way back tp 1971 when Jack Coyle, who owned a Subaru dealership in San Bernardino, California, built a rallying Subaru FF-1. "Pete" Petrowsky, a salesman at the dealership, first drove it in the Baja 500 off-road race in 1971. BRZ is new to the rally racing scene but is quickly making a name for itself at the All Japan Rally Championship.

Subaru has sights set on a championship

Kamata Takuma, Subaru and Subaru Tecnica International (STI) have their sights set on a championship in the JN5 class with the new Subaru BRZ rally car. This 3rd straight victory shows the rear-drive Subaru BRZ with the right setup can be one of the best rally cars in its class. Stay tuned to Torque News for the latest 2015 Subaru BRZ Series.Blue review coming soon.

Other Subaru BRZ stories of interest.
Is a new Subaru BRZ STI being developed from All Japan Rally involvement?