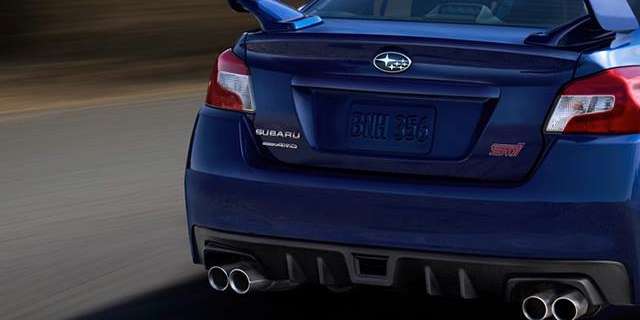 What will make the 2015 Subaru WRX STI popular with driving and performance enthusiasts? It will happen on the road and track.
Advertisement

The 2015 Subaru WRX STI is a performance enthusiasts supercar for all reasons and all seasons, and you won’t find it sitting in the garage. The all-new-generation 2015 WRX STI is a drivers car that is meant to be driven in all conditions. Many people who drive expensive sports cars leave them in the garage, only to bring them out on a nice sunny day. But people who buy the 2015 Subaru WRX STI will take them out in the worst weather just to have fun. It’s why Subaru came out with the WRX and WRX STI performance models.

The WRX STI was developed for Rally racing and made it to production for one reason. So performance enthusiasts could have fun driving these cars on the road and track. Buyers of the 2015 WRX STI will drive these cars everyday and many will even be highly modified with performance and power upgrades.

You won't find WRX STI sitting in the garage

As I was commuting to the office this week, I saw an older WRX STI driving right along with the other commuters in snowy conditions here in the Denver area. But that’s what WRX STI owners do, and Subaru designed them to be driven in all conditions wet or dry. The owner of the STI was driving his performance car in the fast lane and wasn’t taking it easy in the snow. There was six inches of the white stuff that had fallen overnight and the roads were super slick. But that didn’t deter this performance car owner. He knew how the STI would perform in the slick conditions and drove it to its limit.

This writer lives in the mountains west of the Denver metro area and I see WRX and WRX STI owners all the time with snow boards on the top of the car heading west into the mountains during the ski season. Subaru dealers in this area sell many WRX and STIs and people love the all-weather capability and performance of the car at altitude. With their turbocharged Boxer engines, these cars will scream going up the mountain pass at 13,000 feet elevation. They make quick work of the thin Colorado air.

WRX STI is an everyday supercar

The 2015 Subaru WRX STI will be just as addictive to drive, if not more, than the previous models that have been here in the U.S. The first WRX STI made it to U.S. shores in 2003, and the momentum and popularity has grown for the performance car. But buyers of the STI will take it off road and also use it to race. Many WRX STI buyers are serious racers and will take it to events at Rally America National Championship events like the one that just took place at Sno* Drift Rally. Of the 58 entrants last weekend, 25 of the cars were Subaru rally cars. Buyers of the 2015 WRX STI will also take it to the track on weekends to compete against other like-minded enthusiasts.

The all-new 2015 Subaru WRX STI is the everyday supercar for driving and performance enthusiasts. Buyers will use it as an everyday commuter in any weather, race it at Rally America events and take it to the track for fun competition on the weekends. One thing is for sure, the 2015 Subaru WRX STI won’t be sitting in the garage.

GargantulaKon wrote on January 31, 2014 - 6:21am Permalink
You got that 100% right. I'll use it almost everyday for work in any condition. I'll use it on the track as well. When I see people with sport cars that don't use it at least at the local drag track or autocross, I just don't get it. Do you get it to cut people off and quickly weave through traffic? Hey black 370Z NISMO car in the Chester County, PA area, I'm looking at you. At least you can accelerate well on the on-ramp to prevent slowing down people when merging.
James Daniels wrote on January 31, 2014 - 10:55am Permalink
You are absolutely correct; it will not be sitting in my garage; nor will I be owning one. Subaru gave the biggest tease job I have ever seen with both the new WRX and the STI. A concept car that was actually super sexy, a rumored 2.0 liter 280+ hp in the WRX and a 2.0 liter 305+ hp in the STI. Volkswagen and Mercedes delivers 145 and 179 hp per liter in their Turbo 2.0 liters compared to Subaru's 134hp/liter in the new WRX and 122hp/liter in the new STI. So the flagship STI performance car gets less hp per liter than not only it's cheaper brother, the WRX, but also less than Focus ST (126hp/liter), Buick Regal GS (135hp/liter), current and new Golf R (128 and 145hp/liter respectively), and of course the EVO (145hp per liter). If Subaru was going to have a secret unveiling and a giant count down clock on their web page, they should have done more than slightly change the interior and exterior (neither like the concept), and definitely upgraded the engine with a higher output 2.0 liter or 2.5 liter engine. If you just took the output per liter of the old Golf R, they could have gotten 320hp out of the 2.5 liter. If they could have matched their younger brother output per liter of 134hp/liter they should have gotten 335hp from a redone 2.5 liter turbo engine; either way, more power, from their Flagship sports car. How would this have sounded, "New STI, with a new 2.5 liter turbo with 335hp, 322lb/torque, updated suspension, with exterior and interior upgrades. With this new engine Subaru estimates the new STI will run 0-60 in 4.5 seconds and a quarter mile in 12.8 seconds." That my friends would have been worth the hype, the ugly wing, and worthy of a car company's Flagship sports car. Instead, we get performance numbers similar to the outgoing model. Motor Trend even expects the EVO to remain king of the hill in those numbers and it is being reinvented to a alternative fuel vehicle. So if you don't mind airplane wing spoilers, grab an 2014 EVO while they last. If you want the best bang for your buck, get the new WRX. If you want the best of both worlds, wait till summer and order the new Volkswagen Golf R with the exact same engine as the new Audi S3. If you want to rally race with a new car, then I guess this car is for you. However, what % of STI buyers Rally Race. I know 2 people in my town that own the outgoing model and the closest they come to rally racing is driving on a country dirt road. This car had the potential to grab greatness and be named one of the best performing cars for the money in anybody's book. Instead, it just an over priced WRX with a silly, teenage looking spoiler.
Brandon wrote on February 1, 2014 - 12:09am Permalink
I totally agree with James Daniels. What a tease and more importantly what a let down. There is no way I will be purchasing a WRX STI even though I am due for a replacement. I may even consider something else like the Golf R. I feel betrayed by Subaru. All of this waiting around and with the hype of the concept for the same car as before. Pathetic, Subaru !
Dan wrote on February 3, 2014 - 7:20pm Permalink
No point in complaining now. They didn't pull through for YOU so move on, get another car. Good bye.
Brandon wrote on February 3, 2014 - 11:12pm Permalink
Okay. Maybe I was a little strong on the betrayal part. :) But I'm not only one who feels let down. Another car? Quite possibly.
Nige wrote on March 5, 2014 - 6:27am Permalink
The same 2.5 engine as the previous model ! I had the previous model & it blew up x 2 Then I had it fitted with better internals at my own cost just to make it reliable. Rubbish pistons & head gaskets Subaru so why do it again. Use the 2.0 litre engine "it works"
GargantulaKon wrote on March 5, 2014 - 7:47am Permalink
Did it blow up even while it was stock? Did you break-in the engine? Did you get forged pistons?
Nige wrote on March 5, 2014 - 5:14pm Permalink
Subaru fitted 2x engines to my 2008 Sti hatch. When it went again at 35k I instructed my engine builder to fit forged Mhale pistons & Cosworth head gaskets acl bearings + other stronger parts. Then I had it re mapped by jolly green monster to 360 bhp 400+ ftlb torque. It was then a good car. It cost me to make it good. Subaru did nothing to help. After 9 years with Subaru I have now gone to BMW. I miss the Scoob noise but that's it.. Everything else is better.
GargantulaKon wrote on March 5, 2014 - 10:17pm Permalink
But were both of those engines stock before they blew and were they broken-in? What I love the most about Subaru cars is the handling, but the sound is cool too.
Nige wrote on March 6, 2014 - 5:33pm Permalink
Yes to the 1st engine. Subaru then fitted a 2nd one that failed running only 320bhp. The 3rd engine was built & had forged internals. This all happend within 35k miles. It's a well known fact the pistons on the 2.5 are rubbish just like the head gaskets. The stronger engine is the 2.0litre. I hope this helps. Nige