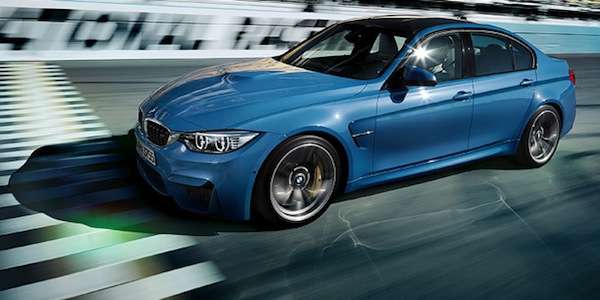 With help from BMW’s performance division, BMW is sitting on top as the luxury car leader in the U.S. What is attracting buyers to BMW M?
Advertisement

BMW continues to be the luxury car leader in sales and beats rivals Lexus and Mercedes Benz to stay number one in the U.S. It’s the performance M division that’s helping the German automaker in March lead the luxury pack. BMW reports their main sales came from the new performance 2015 BMW M4 Coupe and 3 Series sedans.

M3 and M4 continue to impress

The 2015 BMW M3/M4 twins have had quite a year in 2014, scored impressive multiple awards, and they start 2015 the way they ended 2014. The new M3 Sedan and M4 Coupe performance machines have impressed both buyers and experts. When they were revealed at the NAIAS in Detroit last year, it was the beginning of a new era when the twins received a new inline six-cylinder TwinPower turbo engine and a new lightweight design that lowered the weight by 80 kg over the outgoing M3. The die was cast and the twins are making history.

The BMW M3 Sedan and the BMW M4 Coupe both boast an impressive power output of 431 hp. Its peak torque of 406 lb-ft is available across a wide rev band and outstrips the figure recorded by the outgoing BMW M3 by roughly 40 percent. Even with the increase in power, the new inline six-cylinder TwinPower turbo engine achieves a reduction in fuel consumption and emissions of around 25 per cent. Both the BMW M3 Sedan and BMW M4 Coupe will sprint from 0-62 mph in 4.1 seconds (with the optional seven-speed M Double Clutch Transmission).

Buyers are snatching up the performance models and help BMW lead Lexus who reports a March sales record with 31,054 sales, an 8.6 percent increase from the year-earlier period. Mercedes-Benz also had a record month, with 29,921 vehicles sold, a 9.2 percent bump from same period a year ago. It’s the new 2015 BMW M3 and M4 that are helping BMW stay in the lead. Demand remains high for luxury vehicles in the U.S. making this a three-way race.

captbilly wrote on April 6, 2015 - 6:36pm Permalink
I don't mean this to put down BMW al all, I have an M3 now and one of my favorite cars before that was my 2000 740il, but it was inevitable that sales of the M3 and M4 would pick up in the year that a new model was introduced. Just as with Apple fans with their Iphones, fans of the M3/M4 are always looking for the latest and greatest version and will hold off buying when a new model is about to come out. Few people were going to buy an e90 M3 just a few months before the new model was about to hit the dealers so it should come as no surprise that the new model had very high initial sales.