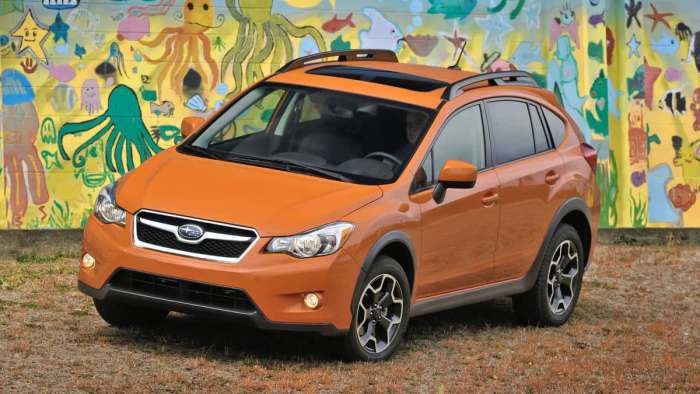 Patience Needed: Massive Subaru Recall Could Take Until 2020 To Be Completed

Subaru is recalling certain Crosstrek, Impreza, BRZ models due to a faulty valve spring in the engine. Scion FR-S is recalled by Toyota. If your vehicle is on the list, it could take over a year to get repairs done.
Advertisement

If you received a notice from Subaru about a recall on your 2012-2014 vehicle, it could take over a year to get the repairs done. Subaru of America announced a recall back in November affecting 2012-2014 Subaru Impreza, 2012-2013 Impreza wagon, 2013 XV Crosstrek, 2013 Subaru BRZ, and 2013 Toyota Scion FR-S vehicles. The engine valve springs in these vehicles may fracture causing an engine malfunction or a possible engine stall.

This is part of a massive global recall affecting the FB20 2.0-liter Boxer engine used in all these vehicles. There are 165,534 vehicles in the U.S. potentially affected according to the NHTSA. Toyota is recalling around 25,000, 2012 Scion FR-S U.S. models. Toyota said it would contact affected U.S. owners by mail starting in December. Subaru also began sending out recall notices late last year.

According to reports from various owners and dealers around the U.S., it could take almost two years to get the repairs done by Subaru dealers. One report from the Burlington Free Press in Vermont says, dealers are waiting for parts and repairs have not yet begun. Bill Hunter, the service director at Burlington Subaru in Vermont says, "We’re still waiting on training which won’t be available to us until February 12th and, due to a limited supply of special tools needed to perform this recall, we only have the ability to perform one of these recalls per day.”

What does this mean for customers?

After receiving the recall letter, one Subaru owner scheduled the next available appointment with Burlington Subaru to get the defect fixed: Nov. 30, 2020, almost two years out. ”We’re hoping we can get additional tools in the future so we can perform more than one a day," Hunter added.

According to Subaru, each fix could take between 7 and 13 hours to complete, “But they have yet to start making the repairs” Hunter said in the email. Dominick Infante, Subaru of America Director of Communications said, Subaru is "actively working on getting the tools out there.” Infante estimated the number of vehicles in the U.S. that are affected is closer to 140,000. He also said, the valve springs actually failing is a very rare occurrence. Subaru of America says since December, they’ve had only 11 reports of the springs actually failing, which is less than a 0.008 percent incident rate.

So if you have a 2012-2014 Subaru Impreza, 2012-2013 Impreza wagon, 2013 XV Crosstrek, or 2013 Subaru BRZ/Toyota FR-S, you’ll need lots of patience to get the recall completed on your vehicle. One owner says, “By the time I can bring my Subaru into the shop to replace a set of recalled valve springs, the 2020 presidential election will be over.”

Sara wrote on February 4, 2019 - 9:22pm Permalink
I have a 2013 Crosstrek and received the recall letter for my valve springs. I called the dealership right away and they had my car in the following Friday and had my car back to me by Monday.
Kelly wrote on February 4, 2019 - 11:26pm Permalink
Not true....parts and tools are available and all dealers have them. We have been doing repairs for the last two weeks. We've done over 20 already and do at least 3 a day....with 1 tool.
Cris wrote on July 3, 2020 - 3:24pm Permalink
Why are they not taking care of 2013 Forester engines of 2.5l engines that have same valve springs as this recall?????I am out 8500.00
Dja wrote on February 5, 2019 - 9:20am Permalink
So, I either take my chances with the dealer "technician" being able to successfully complete this complex repair or I play the odds of being in the .008 percentage. Thanks Subaru, but no thanks.
Dustin wrote on April 3, 2019 - 3:53pm Permalink
I called every local dealer back in January and not a single one of them can perform service until 2020.
Kelly wrote on April 3, 2019 - 6:07pm Permalink
Where are you located? Come to FL and I will have it done in a few days....and provide you a loaner!
Dustin wrote on April 3, 2019 - 6:33pm Permalink
You should come and set up shop in Colorado. You'd make a killing.
Dylan Munroe wrote on September 13, 2019 - 4:24am Permalink
Lucky you mine is dead after 2k clicks and there not replacing anything
MA wrote on April 18, 2019 - 2:44pm Permalink
Brought our Impreza in for scheduled recall appointment yesterday, were told that repair could take up to 3 WEEKS due to complexity of repair, limited trained techs and limited parts and equipment. When we made the appointment we were told it would take 2-3 days. They gave us a brand new Outback as a loaner, so I guess we're okay, but were a bit taken aback by the 3 week estimate. We're in Massachusetts, btw.
TB wrote on April 30, 2019 - 9:42am Permalink
Also in MA, haven't been able to make an appointment yet despite calling occasionally since I received the recall letter.
Ryan wrote on June 13, 2019 - 2:12pm Permalink
I received the recall notice in November 2018. Wasn’t able to get in for an appointment to drop the vehicle off until early April. I was advised that I would have the loaner a while. Just received the call that the vehicle was done today June 13th. I knew it was going to be a while so I’m not upset about it. That’s 2,400 miles that weren’t put on my car.
Kevin wrote on July 15, 2019 - 7:41am Permalink
MY ENGINE FAILED MY CAR WAS DROPPED OVER AT SUBARU IN RAMSEY NJ THEY CALIMED THEY WOULD NOT DUE THE RECALL BECAUSE THE CAR WILL NOT STAY ON. WHICH WHICH IS WILD BECAUSE THE AILMENT OF THE FAILED PART IS THE MOTOR STALLING AND MAKING THE SAME NOISE MY VEHICLE IS MAKING.
Kelly wrote on July 15, 2019 - 8:09am Permalink
If your vehicle falls under the recall there is a separate repair procedure. Contact Subaru and they will assist you. If your vehicle is NOT part 9f the recall then you might be out of luck
David B James wrote on November 20, 2019 - 7:31pm Permalink
my 2013 BRZ engine failed last year 2 months prior to the recall being announced. valve spring broke causing the retainer to break and the valve went into the cylinder causing the engine to seize. I called Subaru at that time and they advised nothing they could do because the car had 65,000 miles and that is 5,000 past warranty. I had to purchase a used 2013 BRZ engine to have installed (total cost over $5000.00) and now I have to get the recall work on this engine performed. I plan to sue Subaru because they knew about the defective valve springs and defective valve train design in 2012 and changed it in 2013, but never disclosed this information to the buyers of their cars. This is "failure to disclose a material fact" which is fraud!
Dee wrote on July 2, 2020 - 4:41pm Permalink
Did they help you in the end? Did you sue? Did you win? Thx...suffering w 2012 now Denise
Cris wrote on July 3, 2020 - 3:19pm Permalink
Well if you do a class action lawsuit let me know. Just had the airbag recall done and we asked mechanic about valve springs......they were still using same ones as of 2017. I have really liked my car but this is sad Subaru is not standing behind this issue. I would discourage my friends and family from Subarus due to this reason....
Cris wrote on October 17, 2019 - 4:07am Permalink
Have a 2013 Forester and my car quit on 9/11/19. Took it into shop for repairs. Broken valve springs took engine out. 8k to repair but no recall yet on my car. Now what????
Jerry Ramos wrote on July 26, 2021 - 6:07pm Permalink
I never got a recall notice and my care is costing me over $2000 to be repaired