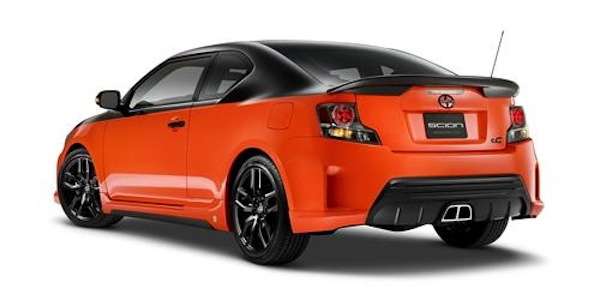 Not many will drive the exclusive new Scion tC Release Series 9.0 everyday

Scion has just revealed the new 2015 tC Release Series 9.0. But don’t expect to be driving one.
Advertisement

What sets this tC apart?

It starts on the outside with its special magma orange and back exterior that you won’t be able to miss. This special tC was designed by Jeremy Lookofsky of Cartel Customs who collaborated with Scion to build this Release Series 9.0 sport coupe. Lookofsky also brought the Scion FR-S T1 turbocharged Targa Top to SEMA this year with its special two-toned Black and Azzuro California Blue custom color.

Other Scion tC Release Series 9.0 features  In addition to its unique black and magma exterior, this special edition also gets an aero kit designed by Cartel Customs, a center exhaust, a Smart Key with Push Button Start featuring the “Cartel Logo” and orange front seat belts. It will also sport orange stitching on the steering wheel and seats. More orange paint gets added to the dashboard, door panels and shifter surround. A blacked out Scion badge rounds out the detail to the front face.

Only 2000 examples will be produced

Scion says only 2,000 examples of the tC Release Series 9.0 vehicles will be produced so it’s not likely you’ll be driving one. The series vehicles will come with either a six-speed manual gearbox or a six-speed automatic transmission with paddle shifters and Dynamic Rev Management technology. Scion will charge an extra $3,210 for the special edition model. MSRP for the manual transmission will be $23,190 and $24,340 for the automatic transmission, excluding delivery ($770).

This special edition tC was also on display ahead of the SEMA Show at a Scion event in Silver Lake, California. The cars are expected to arrive in dealerships in January 2015. For more information about the 2015 Scion tC Release Series 9.0, visit www.scion.com/tCrs9.