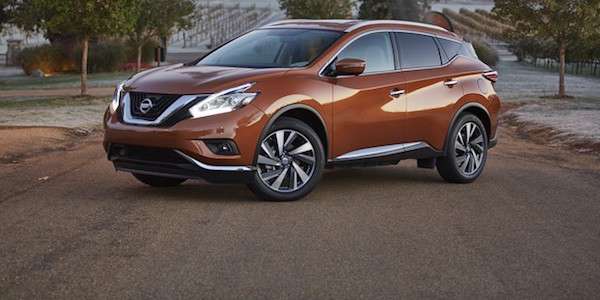 Nissan Sneaks a New 2016 Murano Hybrid Into the US

If you want a Nissan Murano Hybrid, you will have to hunt for it. Why is Nissan being secretive about the new Murano?
Advertisement

Nissan introduces a new 2016 Murano Hybrid into the US market, but it will be a rare car. According to Car and Driver, Nissan will only import around 600 of the Murano hybrids into the US. Nissan hasn’t said much about the models that will be introduced as SL Hybrid and Platinum Hybrid trims.

The new Murano Hybrid uses the same powertrain as the Pathfinder Hybrid and features a 249hp, 2.5-liter 4-cylinder supercharged engine coupled to an electric motor. It comes with a lithium-ion battery and Eco Mode with electric power gauges. Power is sent to the front or rear wheels by way of a Xtronic CVT (Continuously Variable Transmission).

Murano Hybrid does come in both front-wheel-drive and or Intuitive all-wheel-drive configurations. Nissan says the front-mounted battery pack is smaller and slimmer than other hybrids, offering virtually no loss of rear leg room or cargo space. The only way to distinguish the Murano Hybrid is by its discreet exterior badging.

Expect a $3000 price bump over the standard Murano with the 3.5-liter V6. Nissan won’t likely sell many of the hybrid models and it could explain why they are only bringing 600 to U.S. shores. It’s the only hybrid Nissan will have in its US lineup and it will have a limited audience.The Japanese automaker’s Infiniti luxury division still offers hybrid versions of the Q50, Q70, and QX60. (More on Page 2).

Nissan is focusing most of their attention of their all-electric Leaf that is due for a remodel soon and not on hybrids. The green Nissan Leaf remains the best-selling electric car in the world. If you want a new 2016 Nissan Murano Hybrid, you will have to hunt for one.