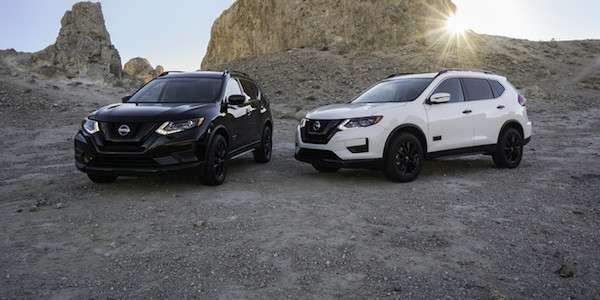 The 2017 Rogue is a hot crossover for Nissan, but fans aren’t purchasing the limited edition Star Wars model. Why aren’t fans buying it?
Advertisement

The new 2017 Nissan Rogue: Rogue One Star Wars Limited Edition models aren’t selling well for dealers around the country. Even with all the advertising connected with the new Star Wars movie, dealers say they aren’t moving the limited edition models. The regular models are selling well.

Even without the connection with the new movie, the Nissan Rogue crossover is the brand’s best-selling model in their lineup this year. Nissan launched their Rogue One campaign at the end of October and it runs until April, so there’s still time for buyers to get a limited edition model. Here’s Nissan’s TV ad showing a woman driving the 2017 Rogue through a computer-generated simulation of a Star Wars battle.

Jeff Rosen, dealer principal of Rosen Nissan of Milwaukee and Rosen Nissan of Madison in Wisconsin, told Automotive News, the partnership between Nissan and Rogue One: A Star Wars Story, has brought in more customers to local dealerships, so it is working.

Frank Kuna, a general sales manager at Avondale Nissan in Arizona, told AN the debut of the 2017 Nissan Rogue: Rogue One Star Wars Limited Edition vehicle and Rogue One movie have “definitely” driven customers into the store. But, he’s only sold one of his four limited-edition vehicles.

Jeff Collura, a new-car sales manager at Kelly Nissan of Route 33 in Easton, Pa., said he hasn’t really seen an increase in store traffic. Collura said Rogue sales have been hot, with eight sold the day after Christmas. But despite lots of interest, the Nissan store has yet to sell any of its four limited-edition models.

Nissan dealers in North America have 5,400 special edition 2017 Nissan Rogue: Rogue One Star Wars Limited Edition models to sell. Very few fans are stepping up and shelling out the extra $1,990 for a few badges and a “free” death trooper helmet.

Tesla Giga Berlin's New Hurdle: It's Not Only the Gov't, but Now Tesla Itself
Teslas Are Sold Out Until 2023, But The Timing May Reverse
END_OF_DOCUMENT_TOKEN_TO_BE_REPLACED