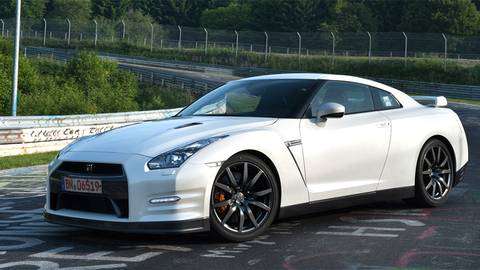 When you think about the Nissan GT-R, the word supercar has to come to mind. Ever since the engineers at Nissan introduced the GT-R, its been all about pushing the performance envelope to the limit. Strap yourself into the driver’s seat of a stock GT-R and expect to have some fun.

Nissan has said that participating in this year’s event with the factory GT-R, will help engineers see what refinements need to be made to the car over the next five years. There isn’t anything better than actual race conditions to learn how a car performs . The 24-hour race should give Nissan plenty of data to analyze.

“This is the reason we chose to enter the Nürburgring 24 Hours: to perform harsher endurance tests for future performance improvements,” Mizuno said.

The Club Track Edition will be as close to a factory model as possible and inside will feature a four-point harness (with six-point retention) on a Bride Gardis III seat, a data log kit from NISMO and an automatic fire suppression system.

Outside there will be some minor body modifications, and bigger tires that are 10 inches in width, up from 9.5 inches, as well as a slightly more rigid suspension, bigger brakes, and a bigger fuel tank. The engine and transmission are all stock. The GT-R comes with a VR38DETT twin-turbocharged 3.8-liter six-cylinder engine pumping out 530 horsepower and 448 pound-feet of torque.

The Club Track Edition gets some significant performance upgrades over a standard GT-R, including a new programming of the ECM, traction control and ABS systems, as well as two-way adjustable Bilstein dampers and new upper front links. There's also a front lip spoiler and 20-inch Rays Forged Aluminum wheels.

It will be interesting to see how the Nissan GT-R Club Track Edition competes against the likes of fully modified BMW’s, Porsche’s, and Mercedes-Benz race cars. The 2012 Nürburgring 24 Hours takes place from May 17 to 20.

Watch the video as the Nissan GT-R team gets ready for the race.