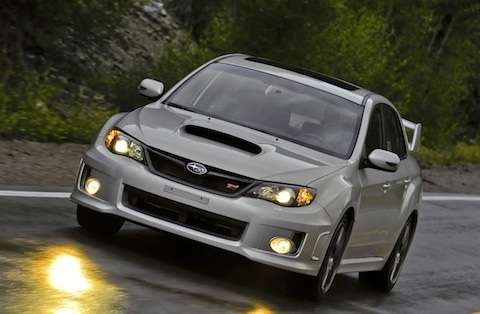 Subaru has dropped the first turbocharged variant of its 2.0-liter, FA-series flat-four engine into the refreshed Japanese-market Legacy sedan and wagon that we could see in the next Subaru BRZ.
Advertisement

We have recently reported that Subaru is working on a faster version of the BRZ, but not to look for a factory equipped turbocharged version anytime soon. However, Car and Driver is reporting we could be seeing what kind of a supercharged engine that Subaru will be putting in the the BRZ and the WRX in the future.

They know this because Subaru has developed the first supercharged version of the 2.0-liter FA-series four-cylinder naturally aspirated engine that is now used in the 2013 Subaru BRZ and the Scion FR-S. Subaru has put the new turbocharged engine into the updated Japanese-market Legacy sedan and Outback wagon. Reports say the new turbocharged engine will develop an impressive 296 horsepower and 295 pound-feet of torque. This is significantly more than the current 200 horsepower boxer engine we see in the 2013 Subaru BRZ.

A big reason to get excited is the fact that the new engine was developed specifically by Subaru using their own direct injection system rather than one coming from Toyota that we see in the current models. The current engine was developed in partnership with Toyota for the Subaru BRZ, Scion FR-S and the Toyota GT 86 joint venture. This could be the next engine that Subaru will use in the next generation WRX and BRZ.

One of the reasons Subaru is concerned about putting a turbo into the BRZ, was because of fuel-efficiency. The company says the turbo variant would be too heavy on fuel and keep customers from buying the affordable sports car. But the all-new 2.0 liter Horizontally-Opposed four-cylinder DOHC direct injection turbo engine uses Subaru’s own direct injection technology that increases combustion efficiency resulting in both high engine output and better fuel efficiency.

The new engine employs a twin scroll type turbocharger that gets better response at low engine speeds and was developed for the smaller 2.0-liter size.
Fuel efficiency was improved by 20% compared to the current 2.5 liter turbo engine. Exhaust emission performance was also improved. So with the new advanced engine technology, Subaru has hit upon the right combination of performance and fuel-efficiency they need to keep driving enthusiasts happy and also meet the new fuel-economy standards.

So we will likely see this new turbo engine in the next two years in the next generation WRX, replacing the current 2.5-liter turbo in the WRX and STI. We will have to wait and see if Subaru listens to its customers and will put the new turbo 2.0 in the Subaru BRZ.

Suby_BRZ wrote on May 16, 2012 - 11:40am Permalink
So is it going to be supercharged or turbocharged? This article keeps switching terms and is very confusing.

LG's New EV Battery Plant Is a Welcome News for Tesla
Tesla Giga Berlin's New Hurdle: It's Not Only the Gov't, but Now Tesla Itself
END_OF_DOCUMENT_TOKEN_TO_BE_REPLACED