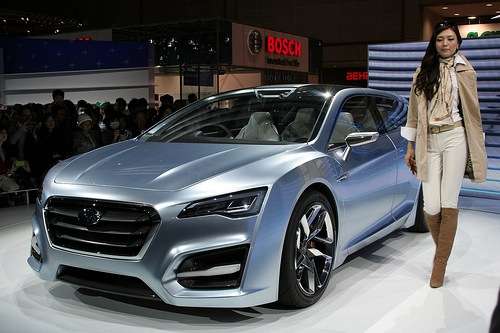 The Subaru Advanced Tourer Concept that was unveiled at the 2011 Tokyo Motor Show was a preview of the next-generation WRX.
Advertisement

When the silver Subaru Advanced Tourer Concept was revealed at the 2011 Tokyo Motor Show last year, everyone thought the car was the next-generation Legacy and Outback. But Motor Trend in a recent story says the Advanced Tourer “was actually an early look at the next-generation Subaru WRX.” Everyone has been wondering what the new WRX will look like, and now according to MT, we have a good idea.

According to the report, a Subaru insider says the Advanced Tourer's front end will go onto the WRX, with similar headlights, air dam, grille, and front brake ducts. Other aspects will be more aggressive as the new WRX will look very different and distance itself from the Impreza and will no longer carry the name. The car will likely have a larger body like the Advanced Tourer Concept and will still be offered as a sedan and hatchback.

Subaru Australia spokesman David Rowley says "Our understanding is that the WRX will be completely distinctive from the current Impreza, it will look considerably different," he says. "I think it's fair to say they'll be looking at a whole raft of technical refinements on WRX because by the time we see it, it will be some years old in terms of the maturity of Impreza so inevitably there will be some very significant technical changes and innovations."

The new WRX will have broader appeal

Subaru plans to move away from the current turbocharged racer-image and more towards a sporty grand tourer with a broader appeal. The new WRX is said to be coming with a higher-quality interior and have a luxury feel. But Subaru will still offer the next-generation WRX with a sport suspension setup, a six-speed manual transmission and give hardcore fans an engine to make then smile.

As we reported here, Subaru has developed the first supercharged version of the 2.0-liter FA-series four-cylinder naturally aspirated engine that is now used in the 2013 Subaru BRZ and the Scion FR-S. Subaru has put the new turbocharged engine into the updated Japanese-market Legacy sedan and Outback wagon. This is likely the engine that Subaru will put in the new WRX and the new turbocharged engine develops an impressive 296 horsepower and 295 pound-feet of torque. The WRX version is likely to develop in excess of 320 horsepower.

The new engine that was just released in Japan, incorporates Subaru’s own direct injection system rather than one coming from Toyota that we see in the current Subaru BRZ and Scion FR-S. The all-new 2.0 liter Horizontally-Opposed four-cylinder DOHC direct injection turbo engine increases combustion efficiency resulting in both high engine output and better fuel efficiency. Another option could even be a new engine that Subaru has been working on with an electric turbocharger that we reported on here recently.

Expect to see the new-generation Subaru WRX arrive in U.S. showrooms sometime in 2015.