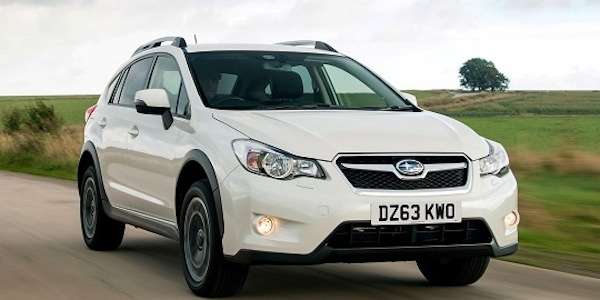 The 2014 Subaru XV STI is making it’s debut in Malaysia as Subaru’s distributor Motor Image shows it off. Why won't we see it in the U.S.?
Advertisement

We’ve seen a Subaru Forester STI in Russia, a BRZ tS in Japan, an Impreza STI and now a 2014 Subaru XV STI in Malaysia. It’s called the Subaru XV STI Performance Edition and its making its debut in Malaysia at Subaru’s new Motor Image showroom. The XV STI gets a number of STI parts and it should be faster with its new STI aero kit.

According to PaulTan.org, STI says this is more than a XV Crosstrek with STI badges. Subaru’s performance division, Subaru Tecnica International (STI), has given this all-wheel-drive crossover some STI equipment that will set it apart from the standard XV and also make it a more dynamic driving machine too.

The original STI body kit will make this XV STI more aerodynamic and STI says they were developed and checked in the wind tunnel by STI test engineers in Japan. This new XV STI features an all-around body kit and a rear spoiler with “XV STI Performance” badges on both sides. STI says the aerodynamics of this XV STI will reduce front and rear lift by 50 percent.

Under the hood, this XV is powered by the stock 2.0-liter naturally aspirated boxer four cylinder engine, so no upgrades have been made to the power output. But STI has added a unique flexible tower brace under the hood that uses ball joints in the middle that STI says will improve body control and improve handling response time by as much as 30 percent. The XV STI comes with Subaru’s Active Torque Split AWD system and a Lineartronic CVT automatic with steering wheel paddle shifters.

An appearance package on the XV STI includes LED daytime running lights, and the interior comes with a few extras like chrome climate control dials and matte silver steering wheel inserts and side panels.

We are starting to see more STI-enhanced Subaru cars around the globe and it's a good sign that Subaru is expanding the STI influence in more of the Japanese automakers lineup. Motor Image has partnered with Fuji Heavy Industries Ltd for the local assembly of Subaru vehicles in Malaysia and displays the first XV STI to this global market. Will we see it in the U.S.?

Don’t expect to see the 2104 Subaru XV STI Performance Edition here in the U.S. Subaru sales in the U.S. are booming and they haven’t seen the need to entice buyers with more STI-enhanced vehicles. They have chosen to stay with the Subaru WRX STI as their flagship performance model.

Neil wrote on July 14, 2014 - 12:24pm Permalink
This kind of marketing is going to kill the STI brand and water the badges heritage down. It will eventually be known as Subaru Technica Impotence. They should rather have come up with another nominachre denoting lipstick improvement models and left STI for the hardcore top drawer stuff.