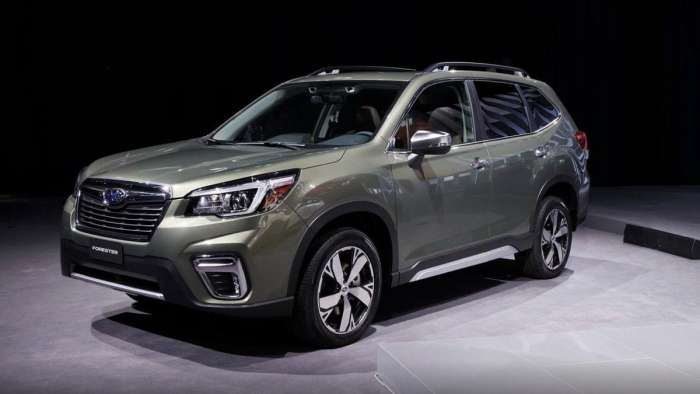 New Subaru Legacy Gets Turbo, If Outback Gets 2.4XT Why Not Forester?

The all-new Legacy sedan gets a new turbo and the 2020 Outback should also get a 2.4XT, so why did Forester 2.0XT get axed?
Advertisement

Subaru axed the sporty 2.0XT model when they redesigned the all-new fifth-generation 2019 Forester and fans aren’t happy. Performance enthusiasts want a Forester with more than the newly-redesigned 2019 Forester’s 2.5-liter naturally-aspirated Boxer producing 182 hp and 176 lb-ft of torque. It just doesn’t excite Forester enthusiasts. And the new 2019 Forester Sport trim isn’t much more than an appearance package.

As for dropping the sportier Forester 2.0XT turbocharged model and coming out with the 2019 Forester Sport, according to Subaru, only 5 percent of buyers were opting for the turbo model, so it was not a profitable model to keep building. Subaru Corp decided to ax the 6-speed manual gearbox for the same reason; slow sales.

According to a report from Motor Trend, Subaru of America COO Tom Doll told them in an interview at the Chicago Auto Show, Subaru won’t be bringing a Forester turbo anytime soon. Doll says it's because demand for the newly-redesigned Forester SUV is too high right out of the gate. He says Crosstrek is also selling too well for the Japanese automaker to offer a turbo version. But it doesn’t mean the door for a Forester turbo to return will be closed forever.

Doll told MT, "You could argue, and some people do, that for the Crosstrek we should have a higher-performance engine in that car, but on the other hand, we're selling as many as we can get. We haven't really hit the top with the Crosstrek yet. Same thing for the new Forester. The new Forester is a sensational car, and it's a home run, particularly the Sport model that you see over here. We just can't stock it. I think both of those car lines have a 20-day supply or less."

So why did Legacy sedan get a new 260-hp 2.4-liter turbo XT model? Sedan sales have been slipping for a few years now as customers make the switch to Crossovers and SUVs. Subaru needs to keep the interest high for Legacy and the XT trim will definitely get the excitement back for the all-wheel-drive sedan. Subaru is not going to ax the Legacy sedan as other automakers have, pairing down their car lines in favor of going with an all-SUV/Crossover lineup.

It doesn’t mean Subaru will never bring back a Forester turbo in the future. Tom Doll went on to say, "In the future, if we need to hit additional volume targets or if the sales wane a little bit, as a way to try to get additional interest in the car, offer a higher-performance engine. That's quite possible."

So if Forester fans want Subaru to bring back a turbo XT trim, customers need to stop buying the all-new 2019 model and especially the Forester Sport trim. Subaru is selling them almost as fast as they arrive from Japan.