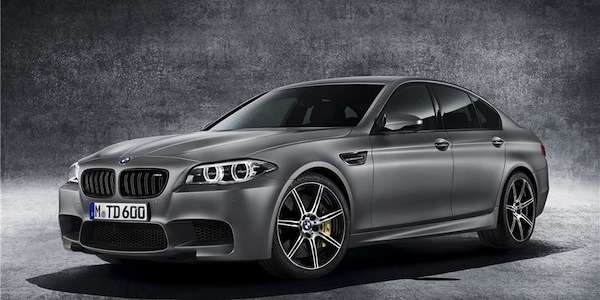 The 2015 BMW M5 Special 30th “Jahre” Anniversary Edition sells for 700K at auction. Who bought the most powerful production BMW M5 in the world?
Advertisement

The original price tag on the most powerful production BMW M5 ever was $138,275. Last Thursday, the 2015 BMW M5 Special 30th “Jahre” Anniversary Edition sold for 700K at the Barrett Jackson auction. It was the last unsold example of the 300 that were produced worldwide, and only one of 30 Special Anniversary Edition 2015 BMW M5s that were imported to the U.S. market.

Who bought the exclusive M5?

The rare and exclusive M5 went up for auction on January 15 and it fetched a whopping $700,000 US. The powerful BMW M5 was purchased by Rick Hendrick who is a NASCAR team owner. Hendrick currently is second on NASCAR’s all-time Cup wins list and leads all owners in modern-era victories. His Cup-level teams have won at least one race each year since 1986, the longest active streak, and averaged nearly 10 wins annually during the last decade.

Hendrick now owns the last unsold example in the U.S. of the most powerful production BMW ever built. The U.S. spec model was introduced last May in celebration of the 30th anniversary of the model. The high-performance BMW M5 has never been driven with only delivery miles on the clock. Hendrick will likely put the M5 in a private collection and the performance car will not be driven.

The most powerful production BMW ever

The BMW M5’s 4.4-liter twin-turbo V8 engine produces 600 horsepower (441 kW) and a massive 700 Nm (516 lb-ft) of torque. The additional power of the V8 was obtained by increasing the charge pressure and by installing a revised management system. All that power is transferred to the rear wheels by a 7-speed dual-clutch gearbox which allows the Special 30th “Jahre” M5 to sprint form 0-62 mph (100 km/h) in just 3.9 seconds. That’s 0.4s faster than the standard production car.

All proceeds for the 2015 BMW M5 went to BMW Car Club of America’s Foundation and the “Street Survival” safe driving program for teen drivers.

Tesla Contemplates A New Strategy for China Retail even As Sales Boom
Jay Leno on Elon Musk & EVs: “I Think He Should Get ... Credit"
END_OF_DOCUMENT_TOKEN_TO_BE_REPLACED