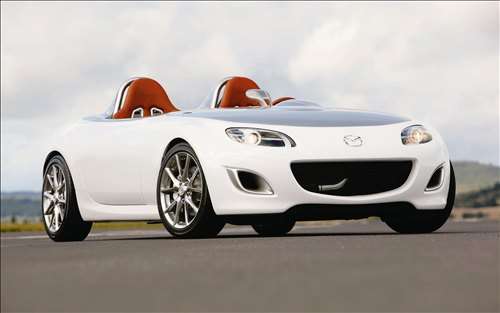 Mazda and Fiat have announced the signing of a non-binding Memorandum of Understanding (MoU) for the development and manufacturing of a new roadster.
Advertisement

In an announcement made today, Mazda and Fiat have announced the signing of a non-binding Memorandum of Understanding (MoU) for the development and manufacturing of a new roadster for the Mazda and Alfa Romeo marques. The all-new convertible will be based on Mazda’s next-generation MX-5 rear-wheel-drive architecture that is due to be launched next year as a 2014 model.

The two automakers will be developing the new roadster sports car jointly, but the cars will be distinctly styled and brand specific. The new convertibles will be light-weight, iconic and feature a rear-wheel drive configuration. The Mazda and Alfa Romeo variants will be powered by each brands unique proprietary engine. The announcement says that after the project plan is underway, both vehicles will be manufactured at Mazda’s Hiroshima, Japan, plant with production for the Alfa Romeo variant starting in 2015.

The details of the non-binding partnership are still being hammered out, and a final, contractual agreement is expected to be signed in the second half of this year. The announcement today did say Mazda and Fiat have also agreed to discuss further opportunities for co-operation in Europe.

Both companies are excited about the partnership

Mazda's Representative Director and Chairman of the Board, President and CEO, Takashi Yamanouchi, and Fiat CEO Sergio Marchionne both made statements after they signed the MoU.

“Establishing technology and product development alliances is one of Mazda’s corporate objectives and this announcement with Fiat is an important first step in that direction. It is especially exciting to be collaborating with such a prestigious marque as Alfa Romeo on a new roadster based on the next-generation MX-5, which is such an iconic vehicle for Mazda and recognized as the best-selling roadster of all time.” said Takashi Yamanouchi.

Speaking at today’s announcement, Fiat CEO Sergio Marchionne added, “This agreement clearly demonstrates our commitment to Alfa Romeo and the determination to grow it into a truly global brand. By partnering with Mazda, we will be co-operating with the recognized leader in compact rear-drive vehicle architectures in order to deliver an exciting and stylish roadster in the Alfa Romeo tradition. We are appreciative of this collaboration with Mazda and look forward to maintaining a fruitful and continuous relationship.”

Alfa Romeo rolled out the 2uettottanta concept by Pininfarina at the 2010 Geneva Motor Show, and it was rumored to be the new Spider the carmaker was working on. And Mazda, no longer in partnership with Ford, has been seeking an opportunity to join with another automaker to share everything from whole platforms to manufacturing facilities.

Similar to the Subaru and Toyota partnership with the BRZ and the Scion FR-S, it looks like the non-binding agreement signed today to build the new roadster could be an advantageous opportunity for both Mazda and Fiat.

Nicolas Zart wrote on May 23, 2012 - 12:29pm Permalink
Is this what Fiat is doing with Alfa Romeo? Using parts with other manufacturers? What a shame. Alfa Romeo has been around for such a long time and racing with many wins, but a Dodge Alfa and a Mazda/Alfa? That's a waste of brand recognition. Maybe Fiat should sell off Alfa Romeo in the end. In the meantime, I am looking forward to this interesting mix.

LG's New EV Battery Plant Is a Welcome News for Tesla
Tesla Giga Berlin's New Hurdle: It's Not Only the Gov't, but Now Tesla Itself
END_OF_DOCUMENT_TOKEN_TO_BE_REPLACED