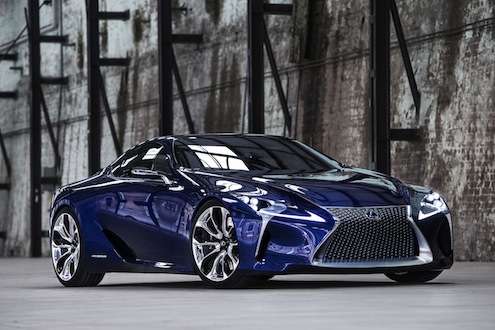 Lexus has revealed the stunning new LF-LC Blue concept and it reveals the future with advanced materials and hybrid technologies.
Advertisement

Lexus has chosen the 2012 Australian International Motor Show in Sidney to reveal the LF-LC Blue concept and what the future of the luxury brand from Toyota will look like. The Lexus LF-LC made its debut in Detroit earlier this year and the Blue concept is the second version of the hybrid supercar that Toyota has revealed. We’ve known that Toyota is changing the culture of Lexus and CEO Akio Toyoda is leading the charge to do it. The Lexus LF-LC Blue is what the future culture of Lexus will look like. It’s going to be sportier, faster and offer luxury sports cars that will compete with the Germans.

Lexus Australia's Tony Cramb said that LF-LC Blue is a demonstration of what the future may hold for sports cars. “For decades, Lexus has been synonymous with hybrid drivetrains, superior build quality, comfort and reliability,” Cramb said. “With the LF-LC we now reinforce our design and technology credentials. The LF-LC is absolutely stunning. Its good looks mask some very exciting design and engineering innovations that will influence Lexus vehicles in the future.

It starts with the latest carbon fiber technology that has been a by product of the development of the LF-LC concept. Lexus has developed extensive in-house technology that blends carbon fibre and aluminium alloy materials together in order to achieve a super light body for the LF-LC concept supercar. That lightweight body mass provides the perfect platform in which to introduce the next-generation Lexus Hybrid Drive system.

Toyota calls the new system Advanced Lexus Hybrid Drive. The new system uses an Atkinson cycle combustion engine which is coupled to an advanced high-energy battery pack. The new battery is different than the current generation Lexus hybrid range of vehicles and delivers greater power from a smaller battery. The combination of the concepts gas/electric powertrain produces an impressive 500 horsepower. which is more than any Lexus hybrid to date. The new LF-LC concept shows that hybrid technology doesn't have to be boring.

The new concept features the latest technology inside as well with a glass roof, a remote touch screen, twin 12.3-inch LCD with navigation and a carbon fiber racing-style steering wheel. The new Lexus LF-LC Blue concept is “part concept, part reality”, but we know for sure that we are seeing the future of Lexus and it is an exciting future indeed.