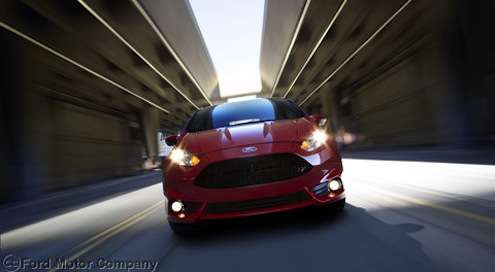 Lucky consumers in 13 cites will get to drive the new 2014 Ford Fiesta ST before its launch, and challenge the competition in the Fusion and Escape in closed track experiences. Will the EcoBoost challenge be in your city?
Advertisement

The events will take place in a closed track experience in 13 cities across the U.S. Consumers will also get to drive the all-new Fiesta ST, the fastest production small car on the planet before its official release. We are guessing it will also be driven on the same closed tracks where consumers will get to experience its power. Will the EcoBoost challenge be coming to a city near you?

The challenge will head to 13 markets nationally

The tour begins in June and will head to 13 markets across the U.S. The EcoBoost Challenge events will take place on Saturdays in June, July, August and September in each market. Events will include an ST Performance Academy, a hyper-mile challenge for Ford hybrid vehicles and head-to-head competitive drives on an EcoBoost challenge course. Events will open at 9 a.m. and run all day through 6 p.m. in most markets.

Ford is bringing competition to the customer and gives them a great opportunity to test the vehicles. “Ford is delivering on its promise to give fuel-efficiency-minded customers the power of choice, by offering a lineup that includes five electrified vehicles, two plug-in hybrids and eight vehicles available with EcoBoost Technology,” said David Mondragon, general marketing manager for Ford and Lincoln. “Throughout this tour, we will let consumers experience the technology that helps deliver better fuel economy and engaging driving than the competition.”

The fastest ever production small car

The new 2014 Ford Fiesta ST is also powered by an EcoBoost engine. It comes with Ford’s 1.6-liter engine that is the fastest small production car on the planet. The new Fiesta ST will give participants in the challenge an exciting ride on the road or track. The performance Fiesta ST sprints from 0-100 km/h in 6.9 seconds, and has a top speed of 220 km/h (137 mph). Ford’s new EcoBoost engine technology is producing fantastic results in both power and fuel efficiency. The1.6-liter turbocharged EcoBoost 4-cylinder produces 182 PS (197 horsepower) and 214 lb-ft of torque, and at the same time delivers 47.9 mpg (European combined) Will the EcoBoost challenge be coming to a city near you?

Locations and dates are:

Ford says that by the end of 2013, more than 90 percent of Ford’s North American lineup will be available with an EcoBoost engine. If you want to register to drive the all-new 2014 Ford Fiesta ST, new Ford Fusion and Escape, consumers can sign up at fordecoboostchallengedrive.com