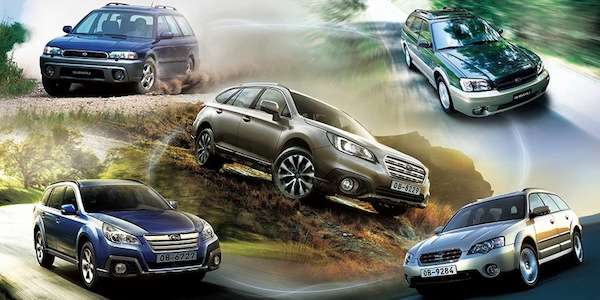 How is Subaru celebrating Outback’s 20th anniversary? The 2016 Subaru Outback gets 3 features that set it apart from the competition.
Advertisement

The 2016 Subaru Outback is arriving in dealer showrooms as the SUV-alternative vehicle is celebrating its 20th anniversary. There’s many crossover vehicles that are now available on the market, but the Subaru Outback was a pioneer in this category. The fifth generation Outback gets three new updates that set it apart from the competition.

Ever since the first-generation Outback, Subaru has retained what made it popular and has refined the crossover concept even further for adventure seekers. Outback combines the comfort of a passenger car, with the versatility of an SUV and the load capacity of a wagon. It’s all-wheel-drive capabilities are what Outback is known for, and it gets more refinements for the new-generation model.

Subaru has taken the fifth-generation Outback, that embodies this concept, to an even higher level. Outback comes with ample ground clearance for off-road adventures but now comes with new features such as X-Mode. Outback owners will be able to enhance vehicle control by engaging X-Mode which also activates the new Hill Descent Control, which uses engine braking to help maintain a constant vehicle speed when the Outback is traveling down a steep mountain trail. Read more about it here.

The new Outback gets enhanced body and chassis rigidity, together with the addition of Active Torque Vectoring (ATV), that gives the wagon handling agility that was developed in the WRX STI, Subaru’s high-performance icon. Starting in 2015, Outback features ATV, a new yaw-control system. This technology, featured in the WRX STI, makes handling more precise and enhances the vehicle’s agility in the corners. This is accomplished by using the braking system to help turn the vehicle. ATV allows the driver to push the performance envelope to the limits and gives the driver a greater sense of control in spirited driving. Read more about it here.

The new Outback features another major advance. New models can be equipped with EyeSight, Subaru’s original crash prevention technology. EyeSight is the world’s first driver assist technology with adaptive cruise control and a pre-collision braking control that uses stereo camera technology only, to detect pedestrians and cyclists as well as vehicles. First launched in Japan in May 2008, the technology has been rolled out in North America, Australia and Europe.

The 2016 Subaru Outback gets the new generation EyeSight safety system that adds a Lane Keep Assist function which the driver can activate with a steering wheel mounted switch. It’s another example of how Subaru is establishing itself as the “safety brand” through advances in safety performance. Read how it’s winning over industry experts.