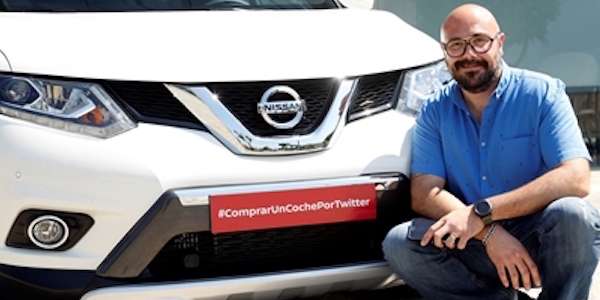 A Nissan dealer in Spain, is the first-ever automotive brand to sell a vehicle exclusively through Twitter. How did they do it?
Advertisement

A man purchased a new Nissan X-Trail in Spain, (Nissan’s Rouge crossover equivalent in the US), to a man through Twitter. Spanish Nissan dealer Antamotor, sold the car by way of the social network, with all customer communication, information on the car and final delivery details, carried out via Twitter.

It took a total of two months from start to finish to pull the car deal off. Raul Escolano “threw down the gauntlet” to any automotive brand in Spain, with the challenge of selling him a vehicle sole through the use of Twitter. Nissan was the brand that took the challenge and ran with it.

How did Nissan do it?

The Spanish buyer used his Twitter account as user @escolano. He first courted automakers using the hashtag #compraruncocheportwitter (in English, ‘buy a car on Twitter’). The Nissan brand’s flagship dealer saw the post on Twitter and began sending Escolano info on the popular X-Trial using the video streaming platform Periscope. The dealer presented all of the vehicle’s key features in a personalized walk-through which was uploaded to a live stream.

Nissan beat out other automotive brand’s cars in a poll on Twitter, posed by Escolano. Followers were asked to rate the cars on his shortlist. The survey received 2.6 million impressions and ranked Nissan’s X-Trail ahead of its rivals with 43 percent of the vote. This put Nissan at the front of the pack.

How was the car delivered?

From there, it was up to Nissan to deliver the new crossover to Escolano without any face-to-face contact with the dealer. The finalized the car deal and delivered the keys to the new Nissan X-Trail by way of courier to Escolano’s home to complete the transaction. (More on page 2).

Customers don’t like the hassle and haggling that typically goes on at a dealer through the normal vehicle buying process. Escolano was able to purchase a new 2016 Nissan X-Trial in Spain (Nissan Rogue), exclusively through the use of Twitter. It’s an innovative way to buy a new vehicle and it likely won’t be the last. The vehicle itself was collected from the brand’s Spanish Headquarters, in the first face-to-face interaction between Nissan and the customer since the sale began two months ago.