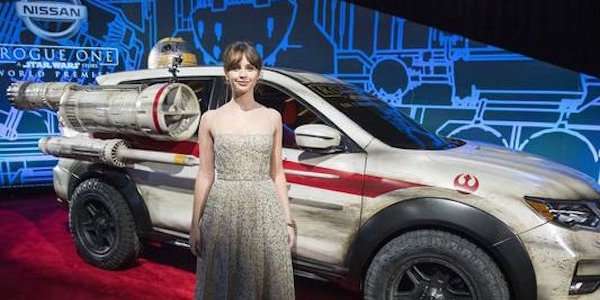 The 2017 Nissan Rogue is the brand’s top-seller in the U.S. and the Japanese automaker is capitalizing on the new Star Wars film.
Advertisement

The newest Star Wars film, Rogue One: A Star Wars Story opens nationwide this weekend after an eight-month buildup. Nissan has capitalized on the title because embedded within, is their top-selling U.S. model, the Rogue crossover. It was a match made in the heavens, exactly where the battle takes place.

It was a partnership destined to happen and was announced by Nissan in August. The serendipitous marriage was a perfect match as both Nissan and the film’s audiences are families. The timing was ideal for Nissan, because the newly-revamped 2017 Nissan Rogue made its launch just before the film hits theaters in the US.

Nissan’s TV campaign began in late October and will run through early January, just when the new Star Wars film is at its peak. Nissan crafted six Star Wars-themed spots around the Rogue crossover in addition to digital outreach and memorabilia giveaways at dealerships.

Nissan launched a new Rogue One Star Wars Limited Edition model at the LA Auto Show. It was the first production vehicle that Lucasfilm has ever sanctioned. If you buy one, each special edition Nissan Rogue crossover comes with an exclusive numbered, full-size replica collectible black Death Trooper helmet.

Nissan also distributed 200,000 special Star Wars keychains to U.S. Nissan dealerships for fans. The keychains are free and available on a first-come, first-served basis. There is a 1-in-1000 chance of finding a Limited Edition version of the keychain. 200 of those are limited edition, high-gloss finish, black-chrome versions of the special keepsake. It's a great way Nissan gets fans in their showrooms.

Nissan was brilliant in marketing the new 2017 Rogue crossover to families during the buildup to the launch of the newest Star Wars film, Rogue One: A Star Wars Story. They will likely sell more vehicles as a result of the partnership. The new Star Wars film opens in theaters on December 16.