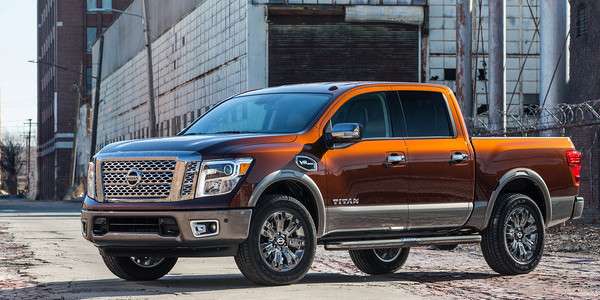 How 2017 Titan XD Does Heavy Lifting for You and Nissan

The 2017 Nissan Titan XD pickups are on their way and they could get Nissan to their goal. Jose Munoz, chairman of Nissan Motor Co.'s business in the United States, Canada and Mexico says their goal is to reach 10 percent market share in the US. Can they catch chief rival Toyota and the Tundra and Tacoma pickups?

Nissan’s first goal is to roll out the new Titan pickups and then later a redesigned mid-size Frontier. First previewed at the 2016 New York International Auto Show, the upcoming Titan XD Crew Cab half-ton pickup is sure to be a hit. The 2017 Titan Crew Cab is powered by a new 390-horsepower 5.6-liter Endurance V8 gasoline engine.

Can Titan deliver for Nissan?

Nissan needs the new Titan to do some heavy lifting in the sales department to reach their goal. Can Titan deliver? If the new pickup delivers for customers, it will definitely launch the brand to new sales heights. The new pickup begins arriving this summer and it promises to be a hit with truck buyers.

Munoz, spoke with Automotive News last month and says, Nissan's return to full-size pickups with the redesigned Titan is a key part of their market-share drive. He says, “We're just now starting to get the versions that will sell more. We introduced the XD diesel last December and Titan sales are up 6.3 percent through May. We will launch the half-ton version in a few months, and that is really the bulk of the volume. They don't reach showrooms until later in the year.”

The volume versions are coming

Up until now Nissan didn’t have the models to cover the entire pickup market. Now they do. Munoz says, “All the versions of the Titan together will cover 85 percent of the pickup segment, while in the past we didn't have all the variations we will now. Now that we are about to introduce all the versions that we plan to sell, you will see sales grow.”

Nissan wants to give truck buyers more options and take market share away from Toyota’s Tundra and the Ford F-150. Can they do it? Coming next is the 2017 Titan half ton volume model for truck buyers. It will offer a V6 engine later, but not at the initial launch. Following the half ton Titan, Nissan will launch Single Cab versions of both Titan and Titan XD followed by King Cab versions of each of these trucks. More details will be coming on the timing of these models. Stay tuned.