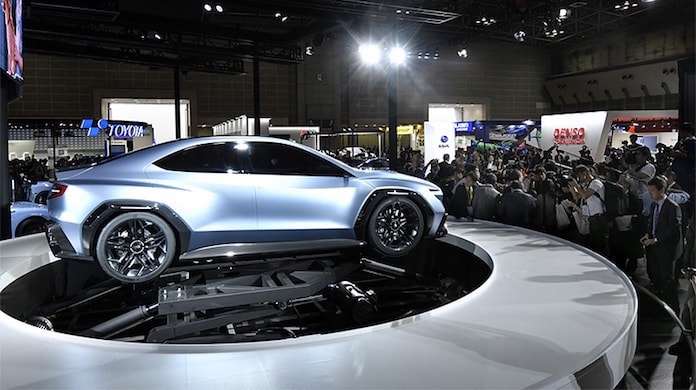 What will happen to the Subaru WRX STI rumble when a plug-in-hybrid or all-electric model arrives?
Advertisement

One of the draws to the Subaru WRX STI and the boxer engine is the popular rumble sound emitted from the exhaust system. Subaru STI fans go to great lengths to get it with custom exhaust systems, and they even have competitions at Subaru events to see who has the best-sounding and loudest WRX or WRX STI.

So what happens when Subaru goes to a hybrid WRX STI with a smaller boxer engine coupled with an electric motor, or an all-electric STI? Get ready, because it’s coming. It may be 5 years away, but it’s coming sooner than you think. Will the popular Subaru Boxer rumble be a thing of the past?

We don’t have any official word from Subaru they are working on artificial sound for the WRX STI, but other automakers and bike manufactures like BMW and Harley Davidson are already working on the solution to eerily quiet EV vehicles and motorcycles. Subaru fans aren’t the only ones who like loud exhaust systems.

According to a recent report by Car Advice, BMW’s head of powertrain concepts, Andres Wilde says, the Bavarian automaker is working on a way to make the car of the future sound like a high-performance machine even without a high-performance internal combustion engine. “We are working on that, in the laboratory last week. It’s hard to describe, I cannot sing it. It’s not so easy to keep this sound from a six- or eight-cylinder,” said Wilde.

The guys at Drive.com reported, Bill Davidson, the company founder’s great-grandson, spilled details about what an all-electric motorcycle will sound like. They are working on producing the patented Harley sound for their new range of electric motorcycles, and Davidson said a Harley-Davidson EV would lose one of the key signatures of its traditional motorcycles, “the lumpy loud exhaust note”, but revealed the Milwaukee motorcycle manufacturer is working on ways to ensure it appeals to a new-generation with a sound he described “like that of a jet fighter.”

Sounds cool to us, and you can bet Subaru and Subaru Tecnica International, are already working on ways to bring the Subaru rumble to the plug-in-hybrid WRX STI and an all-electric model when it arrives in the future. If they lose it, they could lose a whole generation of Subaru WRX STI fans.

Jason wrote on December 14, 2017 - 12:21pm Permalink
Fake exhaust notes are the only thing worse than no exhaust note. I'm on my 2nd STI and I know that the rumble is just the result of a cheaply and poorly designed header. That's why I replaced it with an equal length one.