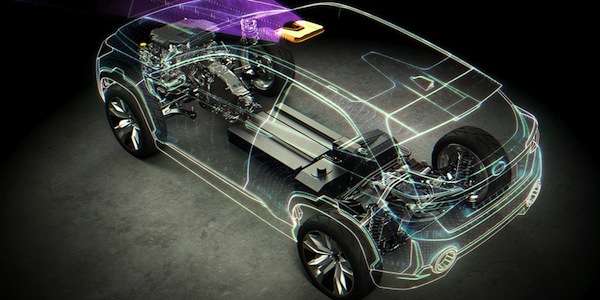 It’s called the VIZIV2 Concept, but it reveals Subaru’s next-generation XV Crosstrek crossover plug-in hybrid AWD technology. VIZIV2 has just been unveiled at the 84th Geneva International Motor Show, and it gives us a good idea where Subaru is headed with their future AWD technology. It will likely be featured in a crossover like the new XV Crosstek that now comes with a hybrid powertrain. The new-generation XV will come with four new features for even better fuel-mileage.

VIZIV-2 was created to show how advanced technology can further improve the Subaru All-Wheel Drive (AWD) system. And it comes with four powerplants to make the new crossover the ideal vehicle to support urban families with active lifestyles. The 4.4-meter long VIZIV-2 is powered by a 1.6-liter turbo-diesel ‘DIT’ (Direct-Injection Turbo) Boxer engine, plus three electric motors.

Subaru has been building AWD multi-use vehicles for more than 40 years and the Japanese automakers new independent rear motor-driven Symmetrical AWD system developed for VIZIV-2, points to a future generation of Subaru AWD technology. This system will likely power the next-generation XV Crosstrek or a future crossover that is yet to be designed. How does it work?

The diesel engine and front electric motor power the front wheels, while the rear two independent motors allow the same or different levels of torque to be applied to the left and right rear wheels, depending on driving conditions. A third motor powers the front wheels, with power provided by a lithium-ion battery pack. Completing the plug-in hybrid powertrain, the four-cylinder 1.6-litre DIT diesel engine is mated to a Lineartronic (CVT) automatic transmission.

This new AWD system uses torque vectoring to improve stability and agility, minimizing understeer by reducing power to the inside wheel and increasing power to the outside wheel. The new system improves on the already successful Subaru Symmetrical AWD system. The unique system automatically selects the best time to use each power unit according to its strengths and the driving conditions, which improves the crossovers fuel efficiency.

The extra torque a diesel powerplant provides, coupled with the electric motors, will give the next-gen XV Crosstrek plenty of performance to move the vehicle up the mountain to get to the ski slopes or move past slower traffic. Most urban families will use the new crossover for commuting during the week, and during low-speed or city driving, the front and rear motors supply much of the vehicle’s propulsion. This system also employs an auto start/stop system, and along with its multiple charging methods, engine power generation, regenerative braking and plug-in charging, they further improve efficiency.

Subaru’s new AWD system features a new variation of Subaru’s SI-DRIVE driving control system, Hybrid SI-DRIVE, which allows the driver to select different profiles for the engine and transmission. A new Eco-Cruise’ mode is added which works in conjunction with the EyeSight driver safety-assist system. Depending on driving conditions, EyeSight’s stereo camera monitors assesses the conditions and “fine-tunes” the engine and motor outputs to reduce fuel consumption and minimize emissions. Relevant information is displayed to the driver via the meters, steering wheel and multi-information display.

Subaru is targeting young active urban families to the brand like never before, and VIZIV-2, which means ‘Vision for Innovation’ gives a good idea of where the brand is headed with the next-generation XV Crosstrek plug-in hybrid AWD technology. It will definitely appeal to the active lifestyle of Subaru’s customers.

Other Subaru AWD stories of interest.

g wrote on March 8, 2014 - 5:24pm Permalink
This is what Acura has already been doing long before, shawd.
captainmike wrote on November 14, 2014 - 3:39pm Permalink
I am sure either it is not the same or is an inferior version that just doesn't work as well as Subaru's since Honda is really not a very good tech company like Subaru is. Honda is better at marketing and fooling people into thinking Honda is great
Jason wrote on July 8, 2014 - 8:16pm Permalink
Yeah, yeah! But Subaru still hasn't offered the EE20 Boxer Diesel engine to the North American market. Why the hell not? What is Subaru waiting for? People will either buy it or they won't, it all depends on what people need the engine for. It's just how things work. I'd like to see the engine and the Lineartronic CVT in the USA.