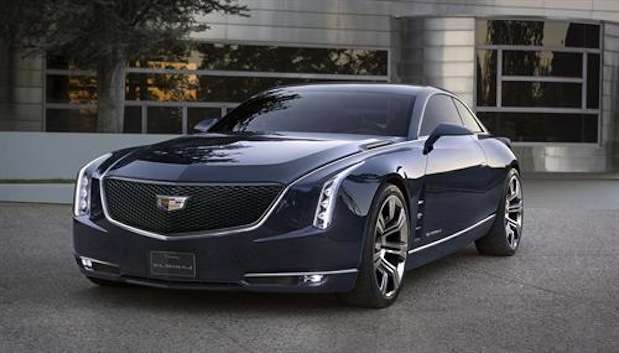 Cadillac has revealed the new Elmiraj Concept grand coupe that is a rear-wheel-drive performance car showing the future of performance at Cadillac.
Advertisement

If you think Cadillac is just about luxury, the new Cadillac Elmiraj Concept reveals what the luxury division of GM is going to do in the future with rear-drive performance cars. Cadillac tells us that the Elmiraj Concept is more than just a concept car, and it reveals their intentions that performance and luxury will be coming for the next generation of Cadillac buyers.

Cadillac is committed to building performance vehicles, and the ATS sport sedan and the all-new 2014 CTS launching this fall in the U.S point to the future. Cadillac revealed the Elmiraj Concept, and the grand coupe shows the luxury divisions vision for ongoing expansion into the luxury performance segment.

A new generation of buyers want both luxury and performance and Cadillac knows they have to go in this direction to compete with BMW, Audi and Mercedes. “Cadillac is fueled by the creativity of our designers, led by Ed Welburn,” said Bob Ferguson, senior vice president, Global Cadillac. “Elmiraj provides a look inside the Cadillac Studio on how we envision performance and luxury for the next generation of luxury drivers.”

The new Cadillac Elmiraj Concept embodies the true essence of performance with its rear-wheel-drive configuration. All true performance cars on the planet are rear drive and offer a more engaging driving experience. At 205 inches in length, the Elmiraj Concept has the proportions to be a true sports coupe. Cadillac says it’s also lightweight which will contribute to better performance.

What’s under the hood tells us that the Elmiraj Concept is all about high-performance. It’s powered by a 4.5-liter twin turbocharged V8 delivering an “estimated” 500 horsepower and 500 lb. ft of torque. The engine takes the baseline technology from the new Cadillac Twin Turbo V6 featured in the upcoming 420-hp 2014 CTS Vsport edition, and expands it to the higher performance format of a V8 powerplant.

Cadillac says, “The concept advances Cadillac’s philosophy of dramatic design and performance, and its commitment to lightweight, agile cars. Elmiraj is constructed with chassis and structural elements of an ongoing Cadillac vehicle development project slated for future production. This new vehicle architecture expands the brand’s commitment to lightweight RWD performance.”

The Elmraj was hand-built in-house by craftsman in Michigan. Cadillac tells us that the new Elmiraj Concept is not just a “tease” but that it represents the future philosophy at the luxury division of GM. Cadillac is moving into new territory and we can expect more high-performance luxury vehicles coming out of Cadillac in the future. Stay tuned.