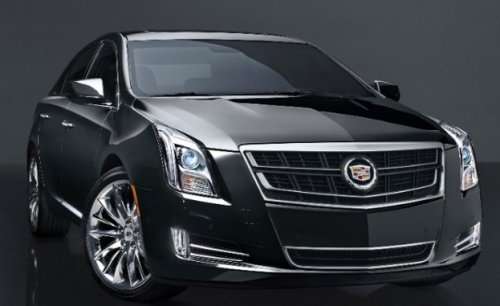 General Motors announced today that the new 2014 Cadillac XTS VSport would pack 410 horsepower from the same twin turbocharged V6 that powers the new CTS VSport and when this new high performance package hits dealerships, it will serve as the most expensive option for the range topping XTS sedan.
Advertisement

The 2014 Cadillac XTS VSport powered by the new twin turbocharged 3.6L V6 will provide the driver with 410 horsepower and 369lb-ft of torque with a starting price of $63,020 including destination. The XTS VSport package will only be available with the higher end Premium and Platinum trimlines so that $63,020 base price technically applies to a 2014 Cadillac XTS VSport Premium. There is no mention of the optional all wheel drive system in the announcement of the official power and pricing figures for the new XTS VSport so we are led to believe that the base price would apply to a front wheel drive model (which sounds like one great burnout machine) as one would surely think that if all wheel drive was standard – the company would be sure to mention that.

"The addition of the new Cadillac Twin Turbo expands and elevates the XTS luxury sedan," said Bob Ferguson, vice president Global Cadillac. "This is a compelling enhancement to what is already one of the most technically advanced sedans in our history."

In addition to the 410 horsepower, twin turbocharged V6, the 2014 Cadillac XTS VSport also features a unique grille treatment, unique 20 inch wheels and we would also expect to see some sort of addition sport tuning mode applied to the Magnetic Ride Control suspension system. While this model would offer the level of performance that CTS VSport buyers can expect, it will allow the range topping XTS sedan to better compete with the higher performance models from BMW and Audi. The 2013 XTS is an absolutely beautiful luxury sedan and while the standard V6 packs enough power to allow the brawny 4-door to get up and go with a bit of enthusiasm – 410 horsepower would most certainly be a welcomed addition to the top of the line Caddy cruiser.

One other aspect of the new 2014 Cadillac XTS VSport package that has gone unmentioned is the standard transmission. The smaller CTS VSport comes only with an 8-speed automatic transmission that is controlled by a set of paddle shifters and I would very much expect the XTS VSport to have a similar transmission – even though the CTS VSport is available only in rear wheel drive form while the XTS could come in front wheel drive, all wheel drive, or both.