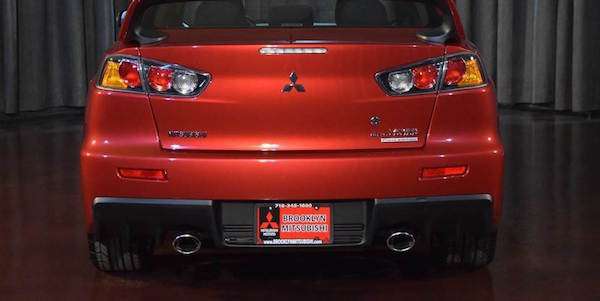 If you want to know why auto dealers have a bad reputation, check out the price on this 2015 Mitsubishi Lancer Evolution Final Edition.
Advertisement

No, it’s not a typo. The 2015 Mitsubishi Lancer EVO Final Edition #0001 is at a Mitsubishi dealer in Brooklyn, New York with a price tag of $88,888. They won an auction, with a bid of $46,200 on Ebay late last year. Brooklyn Mitsubishi picked up the performance car in Cyprus, California at Mitsubishi Motors North America headquarters and took it back to their showroom. Now they are trying to sell it for a cool profit of $42,688.

It’s no wonder auto dealers have a bad reputation. Maybe they don’t really care if they sell it. Would anyone be crazy enough to pay that price? Brooklyn Mitsubishi is currently the number one ranking Mitsubishi dealership in the state of New York. They may just be keeping it as show piece for bragging rights and a car performance fans can drool over.

The car was originally auctioned off for charity

Mitsubishi Motors USA auctioned off the Final Edition EVO #US0001 back in December to benefit the National Multiple Sclerosis Society. Bobby Charalambous, dealer principle, Brooklyn Mitsubishi says the iconic performance car is significant for them to own. "Though owning the first Final Edition Evolution is significant to us, more important is helping to find a cure to MS, an unpredictable and often disabling disease.”

The last of the EVO

Only 1,600 Final Editions were shipped to the U.S. from Japan where they are produced and each comes with a specific numbered plaque on the center console. 2015 EVO Final Edition models are upgraded inside with a black headliner, pillars, sun visors and assist handles, and red accent stitching on the sport seats, steering wheel, shift knob, console lid, floor mats and e-brake handle.

If you want the 2015 Mitsubishi Lancer EVO Final Edition #0001, it’s available at the Brooklyn Mitsubishi dealer for an internet price of $88,888. The Rally Red EVO only has 39 miles on the ODO. This will be the last EVO ever produced and it could become a valuable collector item. It will likely be staying in the Brooklyn dealer’s showroom.