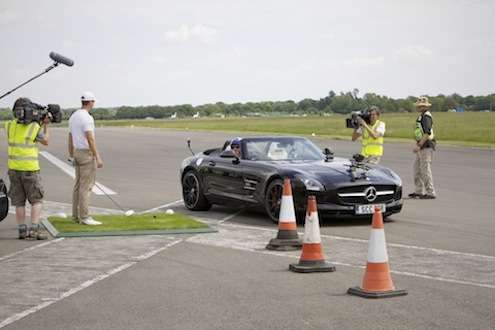 Formula 1 legend and DTM driver David Coulthard and professional golfer Jake Shepherd set the world record on May 30, 2012 at Dunsfold Aerodrome, Surrey, as part of a film for Mercedes-Benz UK designed to celebrate their association with golf ahead of the upcoming Open Championship.

The amazing feat was captured on video as the team set up the incredible golf shot and catch. Professional golfer Jake Shepherd hit the golf ball off the tee as it traveled at 178 mph. Coulthard launched the Mercedes-Benz supercar and got the car up to 120 mph and caught the golf ball as it traveled through the air. It is one of those “did that really happen”? things you have to see to believe.

The skill involved to drive the 571hp SLS AMG Roadster and then catch the golf ball in mid-flight is truly amazing. The video shows the exact moment when David Coulthard caught the speeding golf ball between the seats of the SLS AMG Roadster. Speaking about the astonishing catch, Coulthard said: "The only way to track the ball was to keep your eyes on it all the time: it's a real adrenaline rush but it's not the most comfortable thing to do because for a moment, you're not watching the road!" He continued: "I was as happy as I've ever been winning a Grand Prix because I was so surprised quite frankly that it went in, and went in so solidly!"

The amazing feat was independently verified by a Guinness World Record adjudicator who confirmed the unbelievable achievement secured the title of farthest golf shot caught in a moving car.

David George, Mercedes-Benz Passenger Cars Marketing Director, added: "The SLS AMG Roadster is an extraordinary car so we wanted to do something extraordinary with it to celebrate our association with the upcoming Open Championship, and what better way than to break a world record and create such an exciting film!"

The world record fits the character of this supercar exceedingly well, and, in the video you can listen to this engine's awesome soundtrack.

Check out the world record caught on film below.

John Goreham wrote on June 22, 2012 - 7:13pm Permalink
Super ball fun. Anyone ever throw a super ball out of a car on the highway? If you throw it forward it seems to sort of float along with the car. When it hits the first car it take off like a rocket. The big super balls do even crazier things. So I once heard...