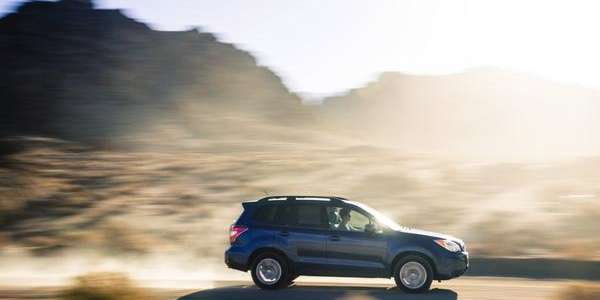 A suburban Seattle couple who claimed a $90 million Powerball jackpot say they will buy a new car. It’s a new 2015 Subaru Forester?
Advertisement

If you had just won a $90 million Powerball jackpot what new car would you buy? Well, a Seattle couple who just won the big jackpot already has their new car picked out, and it’s a 2015 Subaru Forester. According to Washington state lottery spokeswoman Jennifer Carroll, Lisa N. and Everett Quam are deciding if they should take the money in 30 annual payments or a lump sum of $56.8 million. But they have already decided to buy the new Forester as soon as they get the money.

We aren’t sure if this Seattle couple already owns a Subaru vehicle, but we do know that this is Subaru country and the brand is popular in the Northwest. And this couple is a hard-working couple who are not going to be foolish with their money. Lisa has worked as a sourcing specialist at Boeing, managing contracts, for 25 years. Her husband Everett has been a Boeing mechanic for 16 years. The couple has been married 32 years and live in suburban Seattle.

MUST SEE: How this lucky winner received keys to a new Subaru WRX STI

The couple says they plan to quit their jobs at Boeing and then travel, take care of their family and buy a new 2015 Subaru Forester. This couple could buy any car on the planet but they won’t be driving around town in a new Mercedes, Lexus or Rolls Royce, but will get a practical multi-use Forester when they spend some of their Powerball winnings and go shopping for a new car.

They have never purchased a ticket before

In the Komonews.com story, Lisa Quam said she took a break from cooking on Thanksgiving Day and ran to the grocery store with her husband to pick up a newspaper with the Black Friday ads, along with some pumpkin spice. They bought two Powerball tickets while checking out. "The cashier was really nice and asked if we wanted to purchase Powerball. I said, 'Sure!' I had never purchased a Powerball ticket before," she said.

They have the winning numbers

Lisa Quam didn’t even check the numbers until later Sunday night. After she realized she had the winning numbers, she exploded with excitement. "I yelled to my family, 'Get up here!' They all thought I was mad and angry about something. My daughter asked, 'Is this an emergency?' and I said, 'Yes!'"

What car would you buy?

The National Endowment for Financial Education estimates that as many as 70 percent of Americans who experience a sudden windfall and win the lottery will lose that money within a few years and they will be broke. But this Suburban Seattle couple will likely be one of the 30 percent who makes wise decisions with their winnings. They probably won’t be buying diamonds, fur coats and a million dollar house. Their first car purchase will be a new 2015 Subaru Forester and it shows where they will continue to put their priorities. I would buy a Subaru too, but it would be a 2015 WRX STI. What car(s) would you buy?