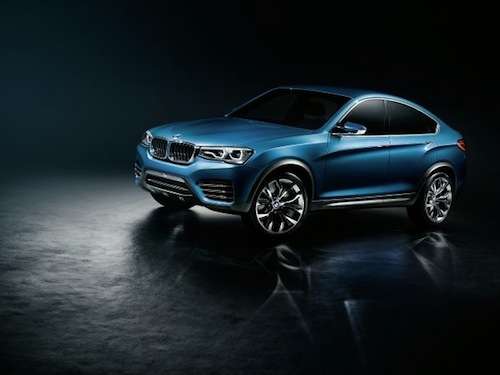 With the BMW Concept X4 that has just been revealed in Shanghai, BMW offers a preview of the future 2015 BMW X4 production coupe.
Advertisement

BMW has announced that the new BMW Concept X4, that just made its global debut at the Auto Shanghai 2013, is a preview of a new 2015 X4 production coupe they will be launching next year. BMW Group has already developed the new X4 Coupe and is getting ready to roll it into production which is scheduled for 2014. What plans does BMW have for the new X4 coupe model?

The new sports coupe will be dynamic

The new Sports Activity Coupe concept from BMW is a forerunner of a new vehicle class that will follow in the success of the BMW X6. The new 2015 X4 coupe will come out of the new BMW X4 Concept and will be a sporty new model for the brand. We can see what BMW has in mind in the videos featured below. They show the sporty character of the new future model with its dynamic lines and unique proportions.

BMW shows the design language that will be featured in the new X4 coupe with the muscular silhouette of the BMW Concept X4. The new 2015 X4 Coupe definitely will make the case for the new model as the most dynamic vehicle in its segment. And BMW is creating a new market segment and is appealing to the emotional senses with its new design that should be as successful as the previous X model range.

In keeping with BMW Coupe tradition, the side air intakes are larger than the inner horizontal bars and make a visual feature of the increased cooling air requirement that hints at high-performance. BMW has not released details of what lies under the hood, but the car’s wide track and low center of gravity combined with the intakes, gives us promise of exceptional performance capability.

The new BMW X4 Concept is giving us a good idea of what BMW has in mind for the 2015 X4 sports coupe. We will have to wait until next year when BMW launches the all-new X4 Coupe to see just how close it resembles the Concept that is the forerunner.

Watch the BMW X4 Concept videos below and get a first glimpse.