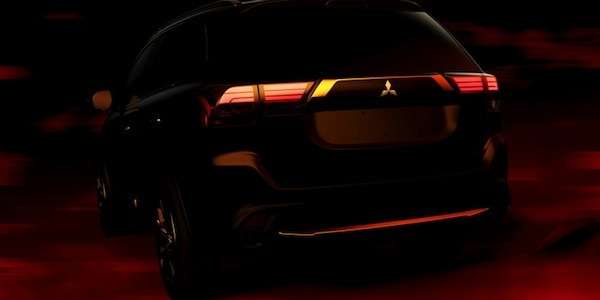 The big reveal at the New York International Auto Show for Mitsubishi will be the new 2016 Outlander. Why won’t fans see a next-generation Lancer EVO sedan?
Advertisement

It’s been known that Mitsubishi was going to discontinue the Lancer Evolution performance sedan as the brand moves in a more eco-performance direction. Mitsubishi is now focusing on SUVs like the new 2016 Outlander that will be officially revealed at the New York International Auto Show during a press conference on April 2. The Japanese automaker says the new SUV will be the first Mitsubishi vehicle to debut the brand's new design language. That new language does not include the Lancer sedan.

CarAdvice talked to Mitsubishi Motors president and COO Tetsuro Aikawa at the Geneva motor show and reports Lancer sedan plans are being shelved. The big reason is because Mitsubishi is focusing on development of SUVs like the popular Outlander and they will also concentrate on developing PHEVs and EVs.

Mitsubishi has been developing the Outlander PHEV technology on grueling rally courses around the globe. They will pass the lessons learned to future vehicles that will be introduced in the next few years. Tetsuro Aikawa told CarAdvice, “There are two reasons for shelving the next generation Lancer sedan development. One of the reasons is because, concerning the investment on development, we’d like to concentrate on SUV, PHEVs and EVs. The second reason is because sedans, in the world, there is very high competition at the moment and it’s very difficult to come up with a profit.”

Mitsubishi will continue to sell the current Lancer, but there will be no next-generation Lancer developed anytime soon. The big introduction at the New York International Auto Show next month will be the new 2016 Outlander SUV. Mitsubishi says the new Outlander will feature over 100 engineering and design improvements.

The Japanese automaker says, the 2016 Outlander will come with “a new, powerful and dynamic appearance, enhanced road performance as the result of improvements to noise levels, ride, handling and throttle response, and a more eloquent yet functional interior space.”

Performance fans won’t be seeing a next-generation Mitsubishi Lancer Evolution at NYIAS. The new 2016 Mitsubishi Outlander will be the big reveal at the New York International Auto Show on April 2, 2015. Stay tuned.