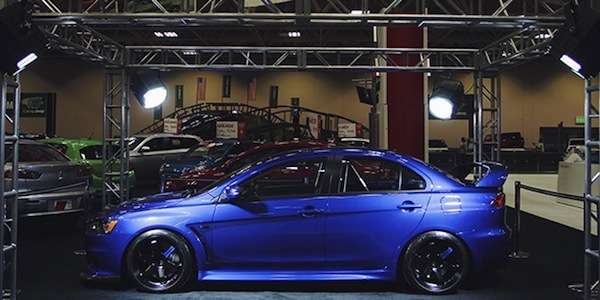 The 311RS Mitsubishi Lancer EVO X returns with a new 2015 Spec Blew model. What upgrades does it get over the 311RS?
Advertisement

The final production run of the 2015 Mitsubishi Lancer Evolution is underway and there’s one more limited production 311RS EVO X model coming. Minneapolis-based 311RS, LLC has announced this new 2015 EVO X, it’s most focused model to date. The company says it will be lighter, faster and more dynamic than the 311RS.

The new 2015 311RS Spec Blew was first shown to a select group last week at the Twin Cities Auto Show. 311RS, LLC takes the new 2015 Mitsubishi Lancer Evolution and gives it even more upgrades over the original 311RS. The tuner says Spec Blew will be “a proper sendoff” to Mitsubishi’s Motorsport icon after 23 years of the Evolution’s production run.

There’s a new special edition 2015 Lancer Evolution coming from Mitsubishi later this year, but it likely won’t have anything on the Spec Blew. The “Special Action Model” will be built specifically for the U.S. and will come with “extra horsepower and other performance improvements.” Mitsubishi will limit production to 2,000-2,500 units of the higher performance sedan and they will be built during the final six month’s of production that will end this year.

The new 2015 Spec Blew is updated and will pump out 500whp. It comes with newly developed components from technical partners AMS Performance, JRZ Suspension, Girodisc and RAYS Wheels. It also comes standard with a new alcantara covered dash and painted dry carbon hood for 2015. The Minneapolis-based tuner says current 311RS owners can upgrade their performance EVOs with the 2015 Spec Blew updates through a retrofit program.

The 2015 Mitsubishi Lancer Evolution in 311RS Spec Blew trim has an MSRP of $54,999 and is available now for pre-order in the U.S. The special performance 2015 Lancer Evolution X will be available in each of Mitsubishi’s six factory colors through 311RS, LLC’s build to order program.

The 2015 311RS Spec Blew EVO X will be officially unveiled at this year’s first MN C&C event on April 4, 2015 in Minneapolis, MN. For more information on the special edition 2015 Mitsubishi Lancer Evolution, you can contact Ryan Gates at [email protected] or call 763-226-8333.