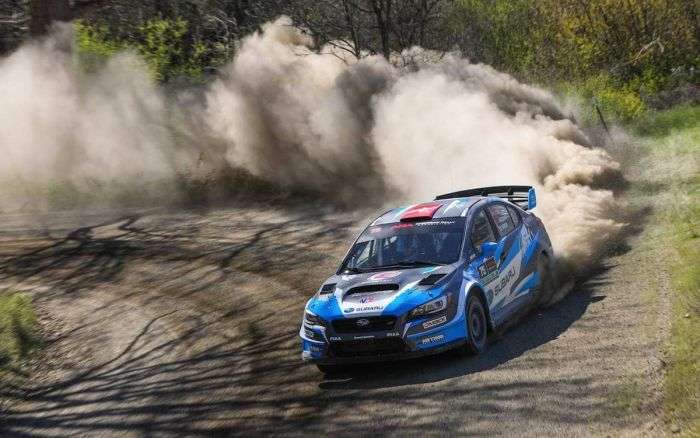 It was David Higgins going against Ken Block again this weekend. See how the Subaru WRX STI performed against his old rival.
Advertisement

Day one (Friday afternoon) of the 2018 Oregon Trail Rally started at Portland International Raceway (PIR) in Portland, Oregon. SRTUSA drivers David Higgins and Craig Drew are no strangers to this event, and the team of Chris Atkinson and Stephane Prevot reunited for the pairs first ever stage rally in the US. Ken Block put his “new” 1991 Escort Cosworth “Cossie” to the test for it’s 1st stage rally of the season.

After the first four stages, the #75 WRX STI of Higgins and Drew led the field by a narrow margin over the #55 WRX STI of Atkinson and Prevot. Just 2.6 seconds separated the two teammates after Atkinson took a stage win on the third stage of the day, narrowing the gap.

Atkinson and Prevot gave up less than two seconds to the rally leaders Higgins and Drew, but Atkinson decided to play it safe saying, “I could have probably gone a bit faster in some places. We lost about 5 seconds to David, having not known the car or the stages, but it’s not too bad.” Unfortunately, Atkinson’s #55 STI would only complete one more stage before a mechanical problem on stage 7 forced the team to resign for the day.

Higgins and Drew continued with their pace throughout the day taking multiple stage wins and finishing off the day with a one-minute lead over Jeff Seehorn and Karen Jankowski in their Subaru WRX STI.

David Higgins and Craig Drew ran a flawless race and Higgins at the final service said, “No issue, just crushing it and avoiding rocks. All good!” Atkinson and Prevot rejoined the rally Sunday under super rally rules. Atkinson ran hard winning 6 of the 8 stages and got his WRX STI dialed in for the next race, but finished down the standings because of the lost time on Saturday.

David Higgins and Craig Drew in the 2018 Subaru WRX STI was the winner of the Oregon Trail Rally and the duo has taken this rally for the ninth time. They beat their old rival Ken Block with over an 8-minute margin. Up next is the Olympus Rally in Olympia, Washington May 19-20.