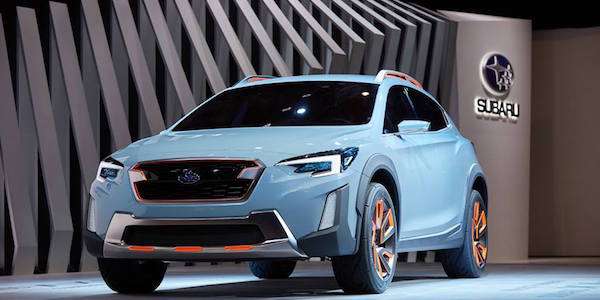 7 Reasons Not to Buy a 2017 Subaru Crosstrek

The 2018 Subaru Crosstrek will get the most significant changes since it launched in 2012. What’s next for Crosstrek?
Advertisement

If you are thinking about buying a 2017 Subaru Crosstrek, you may want to wait. According to reports, the Subaru Crosstrek Hybrid is not coming back for 2017, but that's just the beginning of changes for the 2018 Crosstrek. It’s going to get sweeping changes just like the 2017 Impreza. Why should you wait to buy the 2018 model?

The 2018 Subaru Crosstrek is due for a complete model change and If you want a sneak peak at the 2018 Crosstrek, check out the 2017 Impreza. The Crosstrek crossover is the next Subaru vehicle to get a total makeover. The all-new Crosstrek appears as a 2018 model on Subaru’s new Global Platform. All Subarus will eventually ride on the new underpinnings. Using one platform reduces development time and cost.

The new 2017 Impreza and the new-generation Crosstrek will share many common components. The 2018 Crosstrek exterior will feature a more aggressive facia like the XV Concept pictured above, that Subaru unveiled at the Geneva Auto show. It will likely feature a longer travel suspension and the interior will also resemble the new Impreza that is due out later this year.

Look for six new things on the 2018 Crosstrek. The all-wheel-drive crossover will grow slightly in size, ride on an all-new platform, and enjoy better fuel economy with a direct-injection engine. The new-gen Subaru 2.0-liter engine, with the addition of direct injection, will come with increased horsepower to 152 from 148. Expect fuel economy to increase slightly too. It will also come with several Eyesight upgrades, including the addition of Lane Keep Assist, High Beam Assist, and Reverse Automatic Braking when an obstacle is detected backing up.

The seventh new thing for Crosstrek is being reported by Planet Subaru. They say Subaru will begin producing the new crossover in the U.S for the first time. Along with the 2017 Impreza, the new-generation Crosstrek will also be built at Subaru’s plant in Lafayette, Indiana. Sweeping changes are coming to the all-new 2018 Subaru Crosstrek. If you are going to buy a 2017 model, you may want to hold on for one year. The changes will be worth the wait.

Larry McGill wrote on August 19, 2016 - 2:38pm Permalink
Torque News is always 85% wrong when it comes to Subaru. They just take other articles that other people write and put some bullshit in it to make it their own. Congrats on being unoriginal and untruthful.
Denis Flierl wrote on August 19, 2016 - 4:57pm Permalink
When people use words like always and never, I don't usually respond. Thanks for reading anyway!
Larry wrote on August 19, 2016 - 6:24pm Permalink
Your article last year was don't buy the 2016 Crosstrek because there were new upgrades that were coming on the 2017 model. All the upgrades you listed were the refresh details that did in fact come out on the 2016 model. I would think that a professional who writes articles about a business would at least have facts to back them up and not go solely by assumptions.
Michelle wrote on August 20, 2016 - 5:21am Permalink
Hmm... I'm not sure about that last part. We hear all over the plant how we will build the seven seater, but we don't hear about us building the Crosstrek. However, with a global platform, I wouldn't doubt if they ever made that announcement official.
Dana wrote on August 22, 2016 - 3:04pm Permalink
If we could just get the WRX hatch back in this form, I'd hop on the XV train. I want ground clearance and trunk space with my decent engine.
Fouts, Robert P. wrote on March 20, 2017 - 8:56am Permalink
Will the 2018 Crosstrek have a engine temperature gauge??
Larry wrote on April 4, 2017 - 2:55pm Permalink
Yes. It will have an oil temperature meter that will tell you the temperature.
Ruthie wrote on April 1, 2017 - 9:17pm Permalink
Subaru is breaking my heart......I love my 2010 Forester with manual transmission....Subaru keeps eliminating this option from their cars. I've been looking at the Crosstrek, and now I see the five speed transmission is being eliminated from next year's model. Really Subaru, pay attention! There are those of us who want a manual transmission! Not everyone wants a puffy mom car.
Larry wrote on April 4, 2017 - 2:53pm Permalink
Not sure who told you this information but it's incorrect. The manual transmission is available in the base and premium 2018 Crosstrek redesign.
Bean wrote on September 22, 2017 - 2:44pm Permalink
2018 Subaru Crosstrek is getting a 6 speed, beside the CVT in base or premium . Already at the dealers.