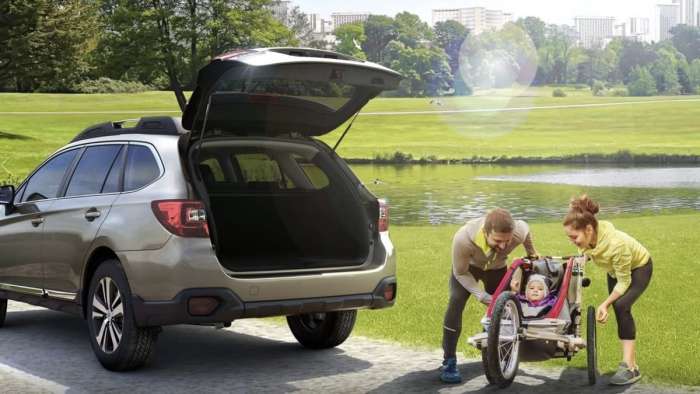 Check out how the all-new 2019 Subaru Forester has your rear covered.
Advertisement

You initially buy a car for what’s up front. How the driver feels behind the wheel, how does the car drive, you check out the heated front seat, and how easy is it to connect your smartphone to the car. But what’s behind the front seats is just as important for consumers. The all-new fifth-generation 2019 Subaru Forester is a goodie out back.

Safety is a core value for Subaru and they made the new Forester the safest one yet, and the small SUV sets new benchmarks once again. The Forester isn’t the most stylish vehicle, but it does deliver class-leading all-around visibility with fewer blind spots throughout the cabin than ever before. To improve visibility for the driver, the Japanese automaker made the A-pillars thinner with more use of window glass. The C-pillars have also been designed to ensure a larger window behind the rear seats for maximum visibility.

The Forester is the brand’s best-selling vehicle around the globe and it continues to be their flagship model. Forester presents a further leap in vehicle visibility never before seen on any other Subaru vehicle. The new Forester now comes with an automatic mirror tilt-down function on the Touring model when the driver engages reverse gear. This assists with viewing blind-spots while reversing and parking. Blind Spot Monitoring, Rear Cross Traffic Alert and Reverse cameras also improve the view of the vehicle’s rear.

Reverse Automatic Braking is standard on the premium trim, which helps the driver avoid collisions when reversing at a low speed. The system uses sonar sensors to detect a possible hazard and automatically stops the car if the driver does not respond. The system will automatically apply the brakes when it judges that the risk of collision is high. Reverse auto braking also incorporates a rear obstruction warning feature, which signals drivers using different patterns of alarms according to the distance from the obstruction.

Forester features 76.1 cubic feet of cargo space and a revised power tailgate that operates in 5 seconds, almost half the time of the previous model. The optional power rear liftgate also comes with auto close and height memory function. It’s easier to load cargo because of the higher and wider rear opening (+5.3 inches over the outgoing model). The new 2019 Subaru Forester has a lot going on behind the front seat for consumers, and it has your rear covered.

Steve wrote on March 13, 2019 - 7:09pm Permalink
You didnt mention the coolest feature, the Facial Recognition. It's clear you are writing these articles based on what you read and not actually visiting a dealership and taking any test drives. You sir are a poor excuse for an automotive journalist
Jeff wrote on March 16, 2019 - 3:02pm Permalink
I still can't believe nobody has commented that neither image in this story is depicting the vehicle the story is about.
Rhonda Barke wrote on December 9, 2020 - 8:38am Permalink
Thank you very much. This information is exactly what i was looking for.