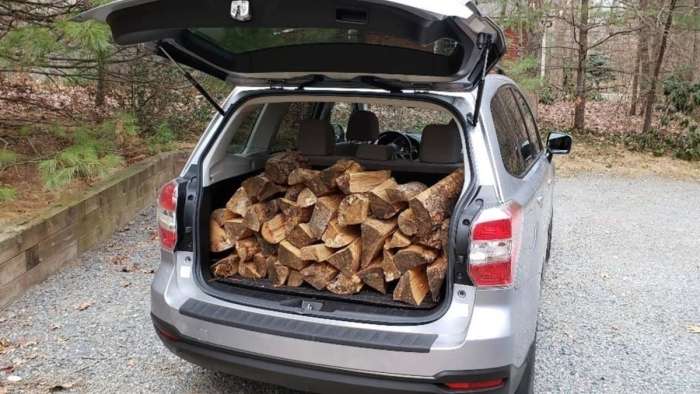 What Crazy Cargo Will You Carry In Your New Subaru Forester?

The new 2019 Subaru Forester gets an expanded cargo area and easier-to-use power rear gate. What crazy things will you carry in your Forester or small SUV?
Advertisement

When you need to carry extra cargo, you’ll need as much room in the back as possible for your gear and cargo. The 2019 Subaru Forester comes with 35.4 cubic feet of cargo-carrying room behind the rear seats which is tops among small SUVs. The load floor sits flatter, and the cargo area’s squared-off shape has been further optimized in the 2019 model for ease of carrying large objects.

Subaru Forester has long been known for its “go-anywhere” attitude, and many owners use their SUV to go on camping, hiking, and mountain biking excursions. Because the fifth-generation Forester rides on the new Subaru Global Platform, the architecture increases total cargo volume to 76.1 cubic ft. with the 60:40 split rear seatbacks lowered, a gain of 1.4 cubic ft. over the outgoing model.

Forester now offers a power rear gate allowing opening and closing when your hands are occupied, and now opens, closes, and locks the entire vehicle with the touch of a button. Another Forester improvement increased the maximum width for the rear gate opening to 51.2 inches wide, a 5.3-inch increase over the outgoing model, and the new Forester rear liftgate is up to 8-inch wider than on some competitive SUVs. This makes it easier to carry some crazy cargo.

We asked one of our senior Torque News journalists, John Goreham to tell us how he uses his 2016 Forester. "One of my favorite things about my Forester is that it is practical. It can haul long items with one seat dropped, haul bulky items in the rear cargo area and it is tough enough that if you throw a load of firewood in back it isn't going break anything. Even better, under the cargo floor is even more space and of course the compact spare. The Forester is comfortable and sophisticated on the highway, but it is always ready to go to work when called upon."

Subaru Corp increased the all-new fifth-generation 2019 Forester’s interior cabin room, improves ingress/egress, and brings added versatility for active families. Tell us about some of the crazy things you’ve carried in your Subaru or small SUV.

LG's New EV Battery Plant Is a Welcome News for Tesla
Tesla Giga Berlin's New Hurdle: It's Not Only the Gov't, but Now Tesla Itself
END_OF_DOCUMENT_TOKEN_TO_BE_REPLACED