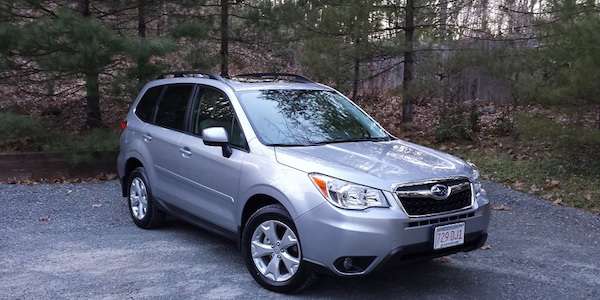 Check out why TN journalist John Goreham chose a Subaru Forester over all other small SUVs. Reason #3 will surprise you.
Advertisement

Why did Torque News journalist John Goreham buy a Subaru Forester over all other small SUVs? The average consumer gets to test drive a vehicle they are interested in buying for a few miles. Auto journalists get the vehicle for a week and give them a thorough test in various conditions. When an auto journalist chooses a vehicle, you can bet they have done their homework.

When we found out Torque News’ own John Goreham chose the 2016 Subaru Forester as his personal vehicle we had to find out why. The small AWD SUV segment is the most crowded and competitive in the automotive industry. There’s many good vehicles to choose from like the Toyota RAV4, Mazda CX-5, Honda CR-V, Subaru Forester and the Mitsubishi Outlander to name a few. Why did John choose the Forester?

He gave us four reasons that set the Forester apart from the rest of the crowd for him. Living in the Northeast, John needed an all-wheel-drive vehicle to replace the 2007 Toyota Highlander his son is now driving. John says after driving a number of the most popular compact crossovers, he narrowed the search to the Toyota RAV4 and Subaru Forester.

Why John chose the 2016 Subaru Forester 2.5i Premium

The first reason is because of the improved fuel mileage of the Forester. John says, “When Subaru redesigned the 2.5-liter engine and moved to the Continuously Variable Transmission (CVT), I was very impressed with the drivetrain in a couple of test vehicles. I had the chance to test the Forester 2.5i Premium and my average mileage for a week of mixed driving was 29 MPG. That really got my attention.”

EPA fuel-economy estimates for the Subaru Forester 2.5i are 24/32 city/highway mpg. After the first 300 miles on his new Forester 2.5i Premium, John has recorded 31 mpg driving a variety of back roads, in town and on the highway in southern Massachusetts.

This one surprised us. The Forester 2.5i Premium comes with a power driver’s seat where the Toyota RAV4 XLE does not. It may not seem like a big deal, but when you have multiple drivers in the family, the power seat feature is a plus. John says he was impressed with the mix of features the Subaru Forester offered over the competition.

Safety is a key factor

Subaru is a brand known for making safe vehicles, and their EyeSight driver assist safety system was a key factor for John making a decision to buy the Forester. John says, “Safety has been a priority to me for a long time, and the Forester is the least expensive compact crossover with forward collision prevention. EyeSight is ranked highest by IIHS and I knew I wanted that system once I read about it. Having FCP save me from a crash in an Acura only confirmed my thoughts on active safety.”

John bought the 2.5i Premium with Navigation, EyeSight, and the all-weather package. How much did he pay for his new Forester? $26,900. John says Patriot Subaru of North Attleboro, Mass. threw in (free of charge) a 100,000 mile lifetime drivetrain warranty. John says, “The negotiations were low-stress and we had a deal quickly.”

John Goreham chose a 2016 Subaru Forester 2.5i Premium over all other small SUVs because of the small SUV’s improved fuel mileage, its ability to handle the rough roads where he lives, the mix of features including a power driver’s seat and it’s top safety rating. Getting a free 100K drivetrain warranty was icing on the cake.