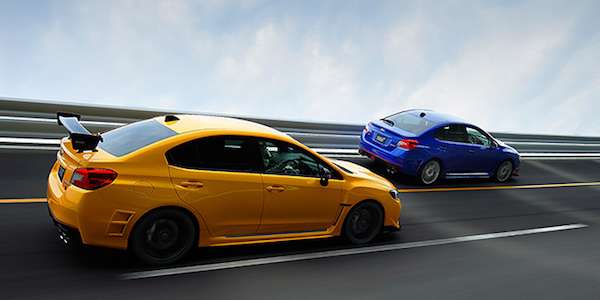 If you looking to buy a new Subaru WRX STI you may want to wait. Is Subaru coming out with a more powerful new engine in the WRX STI?
Advertisement

Subaru is upgrading their entire engine lineup and that will include the new WRX STI. Performance enthusiasts should see a new engine in the WRX STI in the next few years. Will it come with hybrid technology? It’s just speculation at this point but it could in the future. What is coming is an updated turbo engine for the U.S. market. If you are thinking of buying a new 2016 WRX STI, you may want to wait.

Subaru has rolled out their “Prominence 2020” vision and it will include a new plug-in hybrid for the U.S. market by 2018 and a new seven seat Crossover. Subaru will also overhaul its existing boxer engine lineup by 2020. Subaru kept the old 2.5-liter Boxer engine in the 2015 WRX STI for the global market, but chances are it will get a new 2.0-liter engine.

The new-generation WRX STI’s current 2.5-liter powerplant needs to be upgraded. Subaru launched the WRX S4 with a new “smarter” engine in Japan first, and then introduced it later to other world markets in the WRX and WRX STI in Japan. The Japan-market STI is powered by a 2.0-liter turbo boxer engine that produces 304hp and 311 lb ft of torque. The new Japan-only WRX STI S207 uses the same engine that’s tuned to get a maximum power output to 328 PS (323hp).

STI won the Nurburgring 24-hour race with this engine and it’s proven to be a great engine. It’s a better engine than the production 2.5-liter the new 2016 WRX STI comes with in all other global models. Japan’s current 2015 WRX STI 2.0-liter boxer uses a combination of direct injection, high compression (10.6:1), Subaru Dual Active Valve Control System (D-AVCS), a twin-scroll turbocharger and an intercooler to get improved performance. The WRX STI Nurburgring race version uses different cams and higher-rate valve springs and other enhancements to enhance the performance envelope.

STI will need to stay with the competition

Subaru Tecnica International is pushing the performance envelope with engines and chassis technology. It’s good thing because Subaru will need to compete with challengers like the 345hp Ford Focus RS that will hit U.S. shores next year. If you are thinking of buying a new 2016 WRX STI, you might want to wait. Look for the Japanese automaker to upgrade the new STI with a more powerful, more efficient 2.0-liter engine soon.