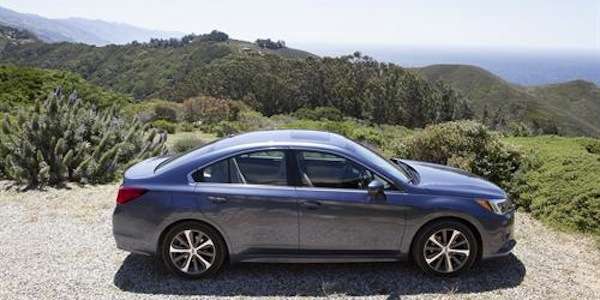 The new 2015 Subaru Legacy is in the news again and this time its been named the “Best Car to Buy 2015” by The Car Connection. There’s four reasons the Editors of the car review and research website says the new Sedan from Subaru is the best value on the market today. They recognized Legacy above an impressive lineup of nominees for its exterior design, spacious interior, fuel economy and safety features.

Subaru completely redesigned the aging Legacy and gave it some much needed improvements over the outgoing model. Buyers are responding with their pocketbooks and buying the new sedan at record clips. Just last month, the 2015 Legacy sedan had its best month ever here in the U.S.

How were the winners determined?

Winners are determined through Car Connections unique 10-point numeric rating value that reflects the overall opinion of their automotive experts. The ratings incorporate scores given to each vehicle on sub-categories including safety, comfort and utility, fuel economy, performance, and styling. The Subaru Legacy was recognized as this year's winner from an impressive field of 11 all new or fully redesigned nominees.

Who did Legacy beat?

The Editors of Car Connection had a lot to say about the new sedan. Bengt Halvorson, deputy editor said, "The 2015 Subaru Legacy gets the award this year, and it's the value factor, including standard all-wheel drive, that really nudges it ahead of every other contender. The Legacy's safety credentials, with EyeSight, rival what's offered in luxury cars with several times the sticker price." He went on to say, “And of all those nominees, the 2015 Legacy is the one that we think you’d be remiss not to include on any value-minded sedan shopping list.”

The newly-redesigned 2015 Legacy is a big hit with buyers and has just had its third consecutive best sales month ever in October with a 105.89 percent increase over the previous month last year. The new sedan features improved fuel economy, all-wheel drive as standard, a new upscale interior, sharper styling and the largest cabin in its class. It also now features the award-winning Subaru EyeSight Driver Assist Technology that makes it one of the safest sedans on the road.

Bill Lawrence wrote on September 9, 2015 - 1:44am Permalink
Looked at this Subaru, with all its virtues but couldn't get past the tacky looking plastic honeycomb grill that cheapens the entire line / design. The front grill really sucks (quite literally.. as every insect and fuzz ball will be sucked - smeared into its cheezy matrix requiring hours of diligent swabbing with Q tips after each drive to get the bug corpses out) Why the cheap shot 'filler grill' / plastic play pen lattice to fill the void instead of a more convincing, sincere design solution. Would have been my car were it not for the front end design failure.