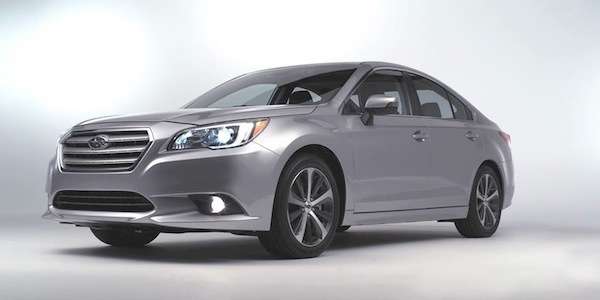 The 2015 Subaru Legacy is setting new records for the brand. What is making the new sedan so popular?
Advertisement

The all-new 2015 Subaru Legacy is soaring high and sets a new record for the brand. The all-new 2015 Legacy set a new monthly sales record of 6,362 vehicles in October. The new Legacy was up a whopping 105.89 percent over the previous month last year. What is drawing consumers to the new sedan from Subaru?

The 2015 Subaru Legacy has been redesigned for the 2015 model year and it comes with better fuel mileage, new safety features and all-wheel-drive. Jeff Walters, senior vice president of sales, Subaru of America, Inc. said, “Our sedans and crossovers are generating more and more interest from new buyers by delivering a unique combination of safety, utility, performance and value,” said “We are particularly pleased with the positive customer reaction to the all-new Legacy which has had its third consecutive best sales month ever.”

As winter approaches, consumers are looking for a sedan that will have all-weather capability and the Legacy comes standard with all-wheel-drive. None of the other top sedans in this segment like Honda Accord LX, Ford Fusion SE, VW Passat SE, Hyundai Sonata SE or Mazda6 Touring offers all-wheel drive. But the 2015 Legacy 2.5i Premium base model does. This is where Subaru and the new 2015 Legacy sedan excels. It’s always had the Subaru all-wheel-drive system, but it gets refined for the new six-generation Legacy.

As winter gets ready to hit most of the U.S. this week, Subaru is positioned to take advantage with the new 2015 Legacy sedan that comes standard with all-wheel-drive. Consumers are looking for vehicles with all-weather capability and the Legacy sedan delivers in a big way.