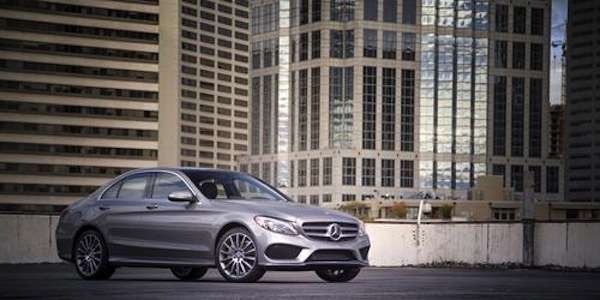 The all-new 2015 Mercedes-Benz C-Class has been called the baby S-Class because it has many new 2015 S-Class features. Here’s 4 new upgrades.
Advertisement

Mercedes-Benz has announced pricing on the all-new 2015 C-Class sedan and it comes in two trim levels for U.S. buyers. The 2015 C-Class will start at a Manufacturers Suggested Retail Price (MSRP) of $38,400 for the four-cylinder C300, and $48,590 for the C400 4MATIC sedan. The C-Class will launch later next month. The new C-Class has been called the “Baby S-Class” and for good reason. Here’s four upgrades it shares with the new 2015 S-Class flagship.

The new 2015 Mercedes-Benz C-Class gets a new lightweight body shell for the new-generation sedan. That will be needed to help achieve the new fuel mileage standards around the globe. The C-Class is truly a global car and sells extremely well in the U.S., Europe and China. It also sells well in South Africa and the BRIC countries. It gets a new expressive exterior design that upgrades the new C and keeps it moving forward like the new S-Class.

The new C-Class gets new assistance systems such as the new COLLISION PREVENTION ASSIST PLUS, DISTRONIC PLUS with Steering Assist and Stop&Go Pilot, The PRE-SAFE Brake, Brake Assist PLUS with Cross-Traffic Assist, Active Blind Spot Assist, and Active Lane Keeping Assist. All these systems alert the driver to potential hazards that can potentially cause an accident and help prevent them from happening. Much of the new safety equipment which first debuted on the new S-Class last year.

C-Class comes with a host of new assistance systems and technology like Stop&Go Pilot that makes it the only car in the segment with partially autonomous driving capabilities. It also features a new chassis, optionally available with AIRMATIC air suspension, that offers the smoothest ride in the segment. This comes directly from the new technology that we saw first on the new 2015 S-Class luxury saloon.

A new level of sophistication

The new-generation 2015 C-Class gets a new level of sophistication in the interior. The new exterior and interior styling of the C-Class sets it apart from its predecessor and gives it a more upscale feel. It gets many of the same styling features we see in the S-Class. It gets a new touchpad and head-up display. It also features a new GPS-sensitive air conditioning to finish out the all-new interior. It also gets a free-standing central display and new high-grade materials that will make the new C-Class feel like it’s in a new class.

The all-new 2015 Mercedes-Benz C-Class raises the bar yet again with new levels of cutting edge technology, safety, expressive design and sophistication. That’s why its called the “Baby S-Class.”