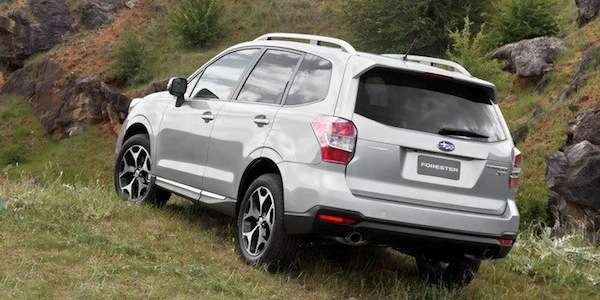 3 reasons 2014 Forester and Impreza are “Best Bets” for buyers

Subaru is certainly moving up in brand recognition around the globe and has received more awards this week. Subaru has captured two of the top ten spots on Consumer Reports “coveted” Best Bets list with the all-new 2014 Forester and 2014 Impreza. These two Subaru vehicles were picked by CR to be on the list from more than 260 vehicles tested. What makes them so special?

The 2014 Subaru Forester took home the Best Bet award in the Small SUV category, the 2014 Impreza took home the award in the Compact Car category. Testers at Consumer Reports spent the last several months driving more than 260 cars, trucks and SUVs hundreds of thousands of miles to whittle down its "best bets" list. They also took into consideration things like vehicle safety ratings and consumer recommendations.

The Subaru Forester received top marks in the small SUV category and was picked for best fuel economy in its class, easy controls and a large back seat. "It brought even more room and comfort to an already competitive vehicle," Consumer Reports' Jake Fisher said.

Consumer recommendations were also considered, and Subaru’s brand recognition is surging like never before. Subaru is building its brand perception the best way possible, by word of mouth. Jeff Bartlett, deputy editor of autos at Consumer Reports says, "Subaru has become the smart choice for many car buyers, It used to be when you asked people what car to buy, they would say, 'buy a Toyota or 'buy a Honda, but now people are saying, buy a Subaru."

The new-generation 2014 Subaru Forester just continues to pile up awards. CR has found out what Subaru owners have known for years. Forester gives their owners good visibility, cargo carrying ability and versatility. It’s everything they want in an all-wheel-drive vehicle.

Impreza gets new convenience and technology upgrades for 2014, and it comes with fuel economy compared to two-wheel drive compacts, but with the benefits of Subaru’s Symmetrical full-time All-Wheel drive. It’s fun to drive and offers buyers a feeling of confidence with its all-wheel-drive capability. And who wouldn’t want that kind of all-weather security along with great fuel mileage?

The all new 2014 Subaru Forester and 2014 Impreza are the Consumer Reports Best Bets because they offer consumers a multi-use vehicle that gets good fuel mileage, with all-wheel-drive security. Stay tuned to Toque News for the latest Subaru news.