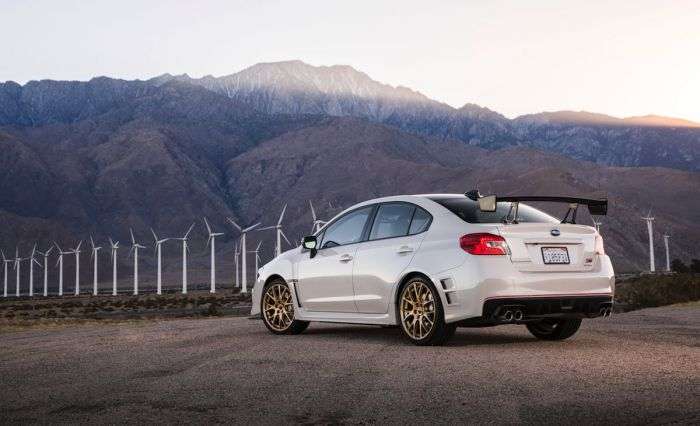 If reports are correct, the 2.5-liter turbo Boxer mill in the 2019 Subaru WRX STI could get a power bump. A report from TheTruthAboutCars.com says a document sent to the National Highway Traffic Safety Administration (NHSTA) by Subaru of America shows a power increase for the STI’s turbocharged 2.5-liter powerplant.

The document is for the 2019 model year VIN decoder which NHTSA uses as a tool to estimate how automakers could attempt to comply with a given CAFE standards of anticipated future vehicle fleets, and to estimate impacts of additional engine technology on fuel consumption, greenhouse gas emissions, and economic costs and benefits to vehicle owners and society.

Subaru has not confirmed this, and it’s speculation at this point, but Subaru could put the WRX STI Type RA 2.5-liter turbo Boxer engine in the 2019 Subaru WRX STI. Subaru Tecnica International engineers bumped up the horsepower in the Type RA by using a new intake and new exhaust system that gives the standard 2.5-liter boxer an extra 2hp and reduces back pressure by 50 percent. It also gets a tweaked engine control unit (ECU) that commands a bit more maximum boost, sodium-filled exhaust valves, and new pistons.

The new internals produces 5 additional horsepower over the EJ25 2.5-liter boxer in the standard WRX STI. The torque is unchanged at 290 lb-ft, but the third gear ratio is more aggressive (1.590 instead of 1.521) in the six-speed manual gearbox to take advantage of the increased lower end torque. The torque curve map was also changed between 2-3,000 rpm to take advantage of the third gear changes.

The Limited Edition Type RA also gets a carbon-fiber roof reducing weight by 5 lbs and lowering the center of gravity 2mm, and 19-inch wheels vs standard 18-inch. It also gets an upgraded suspension with Bilstein-sourced and STI-tuned dampers, and rear wheel vents to reduce lift and drag.

It’s speculation, and Subaru isn’t commenting on the increase in power, but the 2019 Subaru WRX STI 2.5-liter turbo Boxer mill could get Type RA engine mods. In a response to TTAC, Subaru of America's Dominick Infante, National Manager for Product Communications, said it’s “too early for us to comment” on the matter.