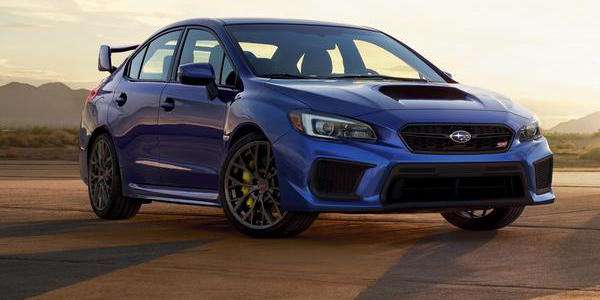 The 2017 Subaru WRX and WRX STI performance sedans aren’t slowing down before the newly-refreshed 2018 models arrive. The WRX/STI set new records with the best-ever month in February. The Subaru brand is hot in the U.S., and continues to roll with Forester, Outback, and Crosstrek also having the best February ever. The flagship performance models stay particularly hot.

2017 Subaru WRX/STI sales were up 5.0 percent over the previous February with 2,498 performance models sold during the month. The WRX/STI remains the best sports car value on the planet with the 2017 WRX starting at $26,695, and the STI starting at $35,195. Decades of motorsports experience have helped Subaru and Subaru Tecnica International develop the WRX STI into a “legendary beast” for performance enthusiasts.

The resale values of Subaru’s WRX and WRX STI remain exceptionally high, and were recently voted the “Best Sports Car” from ALG Canada. In ALG’s recent 2017 Canadian Residual Value Awards, the high-performance sedans scored number one for having the best residual value in the hotly contested Sports Car segment. Most impressive, is the Subaru WRX and WRX STI four-door sports sedans take home ALG’s top honors as Best Sports Car for the second time in a row, and the sixth time in nine years.

Even with all its success, the performance STI could use some engine upgrades. Fans have been asking for changes to the STI’s 2.5-liter boxer engine, and want the 5-Door hatch brought back, but it isn’t hurting sales of the performance sedan body style. Subaru will be upgrading the 2018 WRX and WRX STI with around 20 new improvements when they arrive this spring. There’s no engine upgrades or hatch coming yet.

The 2017 Subaru WRX and WRX STI stay hot and are still setting new records. The Japanese automaker has more planned in the coming year. Subaru of America is entering their 50th Anniversary Jubilee Year, and will kick it off by bringing out new 50th Anniversary Special Edition models in early 2018. Look for Subaru to announce a special edition 50th Anniversary 2018 WRX STI. Stay tuned.