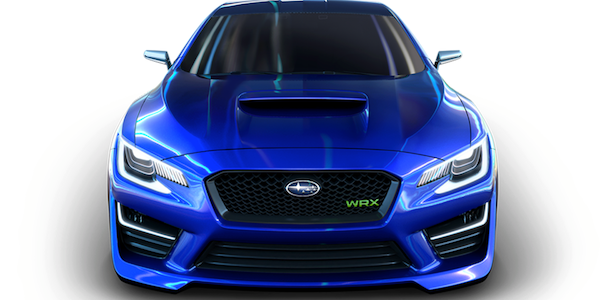 The paint is barely dry on the all-new 2015 WRX and WRX STI and we are already getting hints at the next-generation performance car. But that’s the way the auto industry works, the next-gen cars are already being planned as soon as the new cars are introduced. So here we are already talking about the new Subaru WRX body style.

2016 Impreza and next WRX will get WRX Concept design

According to an interview with Subaru’s chief designer, Mamoru Ishii, he has told the Australian auto website that “the lauded concept's sporty, aggressive stance will indeed reach production and is due to appear on the all-new Impreza due in 2016, and the WRX that will follow.”

Even though Subaru has dropped the Impreza name from the WRX, the two models still keep some of the same design themes. This should be good news for WRX and STI fans as the more radical-looking WRX Concept was very popular with performance fans around the globe. It looks like Subaru was listening and the design will be coming first in the new 2016 Impreza that is due for a remodel.

Mamoru Ishii went on to tell Motoring, “Yes, we have taken the next-generation Impreza’s design in a new direction that we are sure will excite the marketplace,” And he also said that the next-generation WRX would receive some the the WRX Concept car’s “key proportions.” He went on to say, “We are planning to give the lower section below the hip line a wider, more substantial stance and narrow up the roof section.” This suggests that the new WRX and STI will have a lower stance, and bolder look.

WRX Concept design still on the drawing board

Back in February, we reported that Subaru WRX Project General Manager, Masuo Takatsu said that the WRX Concept design that everyone liked so well could still make production. Takatsu said, “It’s quite possible that the main theme of the concept car will be put into a production car design.” Takatsu blamed lack of engineering resources for the design of the new-generation 2015 WRX / STI and the reason it didn’t resemble the WRX Concept car.

Masuo Takatsu also said, that in addition to lack of engineering resources, safety regulations and “other outside forces” kept Subaru from building the 2015 WRX / STI in time for this new model change. Takatsu went on to say, “But once it comes to production, we had to comply with regulations, livability and practicality, and that’s the reason it deviated so much from the concept car.”

Subaru CEO Yasuyuki Yoshinaga, who unveiled the Japanese automakers new “Prominence 2020” vision plan, has given the company a whole new attitude towards its product line-up. Subaru has been very conservative in their designs, but that could be changing starting with the new 2016 Impreza that is getting a new design change.

It looks like the new 2016 Subaru Impreza that will be built now at Subaru’s plant in Indiana by the end of 2016, will be coming with a new design language that will resemble the WRX Concept car. The paint is barely dry on the all-new 2015 WRX and WRX STI, but the next-generation WRX and STI will also more resemble the concept car. That’s good news for performance fans.

Johnny wrote on June 4, 2014 - 10:41am Permalink
Great news! Two big problems I've always had with the Impreza and WRX are: 1. How roomy and comfortable they are for what they are and 2. The awesome visibility that their low belt lines afford. It sounds like these issues will be fixed in the next generation! Form over function, bro! (Just in case you missed it, this was 100% sarcasm.)