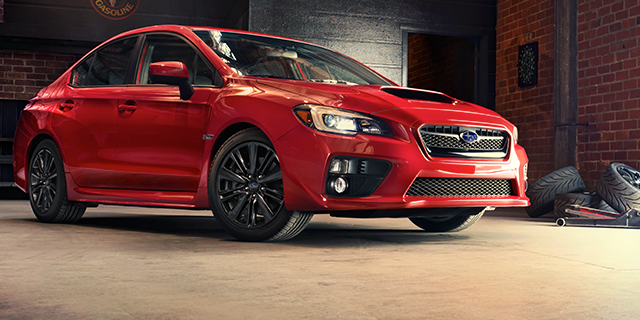 Are you thinking about buying a new 2015 Subaru WRX? Here's how it shakes out against the competition. This writer thinks the new 2015 WRX is the best example of performance the Japanese automaker has ever produced, but how does it stack up against the competition? The new-generation Subaru WRX has quite a few things that it does better than the 2014 Ford Focus ST, 2013 VW GTI, 2013 Mazdaspeed3, and 2013 Honda Civic Si. How does the new WRX match up against these competitors?

While peak numbers are nice to brag about, they often don't mean much, since few people operate their engines at peak conditions (which would generally be full throttle) in a typical day. What is more important with torque, is how it’s applied over the power curve of the engine. Subaru WRX has less torque, but it’s available over a broader rpm range. And when combined with the available hp, performance is available at any time, in any gear. The WRX absolutely wins here.

Most automakers use the latest Direct Injection technology in their engines as does the competition. The only exception would be the Civic Si which still uses Multi Point Injection. Any new performance engine must have direct injection as the engine's computer gains even more precision control over the amount of fuel delivered, optimizing the air/fuel mixture to create efficiency and increased power delivery. WRX, Focus ST, VW GTI, and Mazdaspeed3 tie here. The Honda Civic Si loses.

Look for AWD in more performance cars in the future

In the area of all-wheel-drive, Subaru is already ahead of the curve and uses its excellent Symmetrical All-Wheel Drive system. All the competition uses the less effective front-drive configuration. Most performance automakers like AMG will be going exclusively to all-wheel-drive due to its more effective delivery of power to all four wheels. This works well on the road and track, and in wet or dry conditions. Subaru wins out big in the area of power delivery to the wheels.

How many gears do you need?

Subaru WRX, Focus ST, VW GTI, Mazdaspeed3, and Civic Si all use a six-speed manual gearbox, so it’s a wash here. Subaru does use new carbon synchronizers on first and second gears and a short-throw shifter for quicker shifts. But what about automatic transmission applications? WRX gets a new Sport Lineartronic Transmission with manual mode and paddle shifters. Focus ST no automatic option, VW GTI gets a Dual clutch automated manual (DSG), Mazdaspeed3 no automatic option, and Civic Si no automatic option. For those wanting an automatic, Subaru’s new CVT gets better fuel efficiency but also benefits from a choice of stepped automatic shifting with eight pre-selected ratios and is the easy winner here.

What is Electronic Torque Vectoring?

If you haven’t heard of Electronic Torque Vectoring (ETV), it’s a module that provides an unmatched driving experience. Driving and traction performance can be pushed to new limits while improving safety and stability at the same time. Who has it? WRX yes, Focus ST yes, VW GTI yes, Mazdaspeed3 no, and Civic Si no. This is a must for any performance car. But Subaru wins here again because when it’s combined with all-wheel-drive, the combination improves safety and stability even more.

Who cares about the steering ratio?

Steering ratio is very important in a sports car. The lower ratio gives the steering a quicker response (you don't have to turn the steering wheel as much to get the wheels to turn a given distance) which is a desirable trait in sports cars. These smaller cars are light enough that even with the lower ratio, the effort required to turn the steering wheel is not excessive. Let’s see how these cars shake out. WRX 14.5:1, Focus ST Variable: 13.7 to 10.1, VW GTI 16.4:1, Mazdaspeed3 16.2:1, and Civic Si 14.94:1. While the Subaru WRX has a very low steering gear ration, the Focus ST gets the nod hear because of the variable-ratio steering, but WRX beats the others.

And last but not least, is the area of passenger volume (cubic feet), and here are the numbers. WRX 96.9, Focus ST 90.7, VW GTI 93.5, Mazdaspeed3 94.6, and Civic Si 92.1. The new 2015 WRX grew one inch in length over the outgoing model. This is good news for taller performance enthusiasts. The WRX is the clear winner in providing more room for driver and passengers.

The all-new 2015 Subaru WRX wins in most areas except one when compared to the 2014 Ford Focus ST, 2013 VW GTI, 2013 Mazdaspeed3 and 2013 Honda Civic Si. WRX is a great choice for driving and performance enthusiasts. See what two major changes are coming to the 2015 Subaru WRX to make life more comfortable.

LG's New EV Battery Plant Is a Welcome News for Tesla
Tesla Giga Berlin's New Hurdle: It's Not Only the Gov't, but Now Tesla Itself
END_OF_DOCUMENT_TOKEN_TO_BE_REPLACED