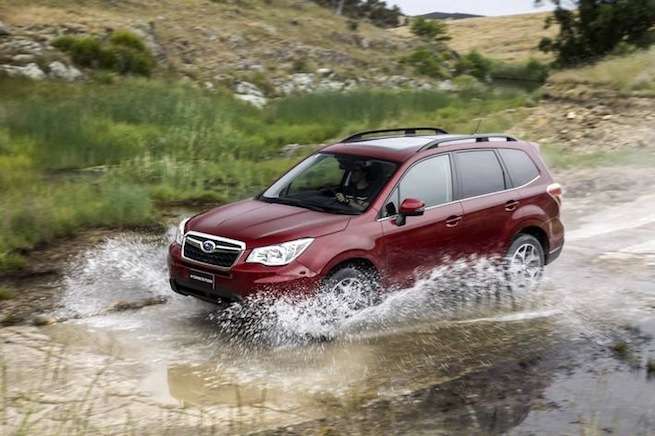 One key reason why Subaru is so dedicated to AWD [video]

Subaru is the only automaker who has all-wheel-drive vehicles across its entire range. Why are they so dedicated to vehicles like the 2014 Forester and new XV Crosstrek? Besides the sporty two-door sport coupe BRZ, every vehicle in their lineup comes with their Symmetrical AWD system. They could certainly produce more fuel-efficient cars without it. So what’s going on with Subaru?

The Symmetrical All-Wheel Drive provides the utmost control on the road. Subaru took the new 2014 Forester across the frozen land of Norway for some extreme testing, and the all-wheel-drive with X Mode worked flawlessly. Their Symmetrical AWD system provides balance and an even distribution of power for maximum traction, instead of the “slip-then-grip” alternative on many SUVs.

Every Subaru comes standard with Symmetrical All-Wheel Drive for better stability, efficiency and a quicker response to slippery conditions except for the BRZ. The sporty BRZ has rear-wheel-drive which is the only way to go for a true sports car. But even the BRZ, like all other Subarus, has the engine mounted in-line with the drivetrain, helping provide a seamless transfer of power.

Most new cars today feature front-wheel drive which generally understeer or push in a turn, while rear-wheel drive vehicles can often oversteer in a turn. But Subaru’s all-wheel-drive sends power to all wheels simultaneously for maximum traction and acceleration under wet or dry conditions. In slippery conditions, that power instinctively flows to the wheels with the best traction.

Subaru is growing quickly around the globe because they have remained true to their core values of designing and building automobiles that are all about proving the most stable driving under a wide range of driving conditions. The all-new 2014 Forester and XV Crosstrek are just two examples of this technology. Subaru will always remain committed and dedicated to AWD on its vehicles.