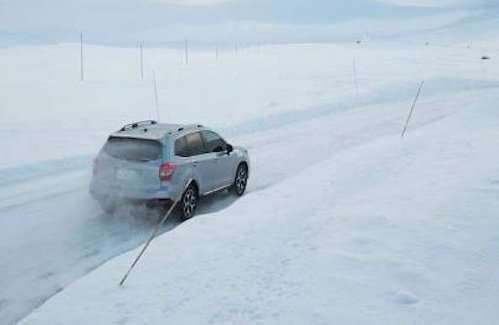 Subaru took the the all-new 2014 Forester to the freezing land of Norway in Northern Europe for some extreme testing on a ski slope. See how the new Forester performed.
Advertisement

As the new 2014 Subaru Forester continues its trek around the globe, automotive journalist Akihiko Ouchi and leader Koya Nitta start stage two of the global test. The test will take the new Forester on a 60,000 mile trek across five continents. The first stage saw the Forester take on the Outback in Australia and the car performed extremely well in the most adventurous terrain. This stage two of the Forester test will take the new crossover to Eurasia and starts in the snowy world of Norway. How will the new Forester perform in this extreme land of snow and cold?

The Forester heads to Vardresflya

To test the ability of the Subaru Symmetrical AWD, they head to Vardresflya in Norway. On the way, they stop at a ski resort to test the ability of Forester’s X Mode. On unpaved and slippery roads, torque is not distributed evenly to all four wheels and one or more wheels can begin to slip and the vehicle can lose traction and get stuck in the snow. X Mode is designed to be used easily and can be engaged with a flip of a switch. The X Mode will allow any driver regardless of skill level, to escape any extreme situation they may encounter.

Forester X Mode is put to the extreme test

The team decides to test the X Mode by taking the Forester directly up the snow covered ski slope. The new crossover uses only standard snow tires for the test. Can the Forester really climb a ski slope? Ouchi drives the car onto the slope and begins to make the ascent up the snowy hill. The tires begin to slip as the slope gets steeper, but the Forester is able to keep traction and moves up the mountain. The X Mode controls the car and keeps it moving in a straight line until they reach the top. A pretty amazing feat for the mid-size SUV.

Next they head down the mountain and test out the Hill Descent Control which stabilizes the car on the steep slope going down. Ouchi says, “Ok, it’s working good, Wow!” as they make their way down. A normal SUV would slide and be swept away on the snow and ice, but the HDC controls the tires as it begins to slide to the side. On the navigation screen, the driver can see which tires are controlled by changing color from green to yellow and shows how the Subaru system works on the slippery ski slope. The driver can let the HDC system do the work and sit back and enjoy the ride.

The snow banks were higher than the top of the Forester

Now the team is ready to head to the frozen land of Vardresflya. The road along the way is cold and windy with temperatures at minus 20 degrees C (4 degrees F). The snow and ice covered roads put the Symmetrical AWD to the test. A road grader had gone through ahead of them and left ruts in the road making it more difficult. But the Forester cuts through the snow without losing traction even on the sharp curves. The snow banks were higher than the top of the car as it traveled on the cold mountain pass in Norway.

The Symmetrical AWD on the Forester uses a torque split improved by the electronic control and it worked flawlessly as the team made their way across the frozen tundra. The power is balanced to all four wheels depending on which wheel needs more traction. And body roll is kept to a minimum in the corners because of Foresters low center of gravity. The Boxer engine sits low in the chassis and keeps the SUV stable where others would have a problem.

The combination of Symmetrical AWD and X Mode keeps the new 2014 Subaru Forester stable and able to handle the most extreme conditions in Northern Europe. Next, Forester will head to Col de Turini where the Rallye Automobile Monte Carlo is held. To be continued.