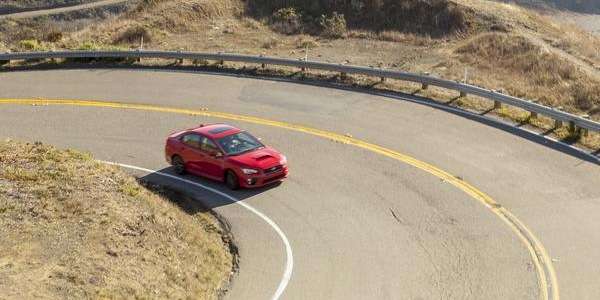 Motor Trend takes the all-new 2015 Subaru WRX and pits it against the 2014 Ford Focus ST. Which one is best to drive?
Advertisement

If you take the 2015 Subaru WRX and the 2014 Ford Focus ST on a curvy mountain canyon road to see which performance car is the best to drive, which one will win? That’s what Motor Trends Jonny Lieberman does in this video edition of their weekly episode of Head 2 Head. But I have to ask, is this really a fair comparison? Seriously?

Taking price and power, the cars are very similar. The WRX estimated cost as tested is ($31,555), the Focus ST ($30,125). Both are powered by a 2.0-liter turbocharged four-cylinder engine with similar power outputs, the WRX 268 hp with 258 lb ft of torque, Focus ST gets 252 hp and 270 lb ft of torque. Each comes mated to a six-speed manual gearbox. So far, it looks fair, but when we look further it all changes.

In this writers opinion the comparison between these two cars is unequal because of the drive configuration and the technology that goes into the WRX suspension. The Subaru WRX comes with the brand's Symmetrical all-wheel-drive while the Ford comes with front wheel drive. In my opinion this is an unfair advantage for the WRX. While the Focus ST is a fun car to drive, it’s not going to carve the curvy mountain canyon roads the same as the rally-bred Subaru. WRX benefits from decades of Rally racing technology that STI translates directly into the production WRX and WRX STI.

That being said, Lieberman like myself, finds the Ford Focus ST a blast to drive. It’s like a pocket rocket and Ford did a great job with the sporty hatch. Speaking of hatch, Subaru doesn’t offer the five-door in the WRX and I believe they have missed the boat big time on this one. But the Focus ST comes in a hatch model and that alone will draw many buyers away from the WRX.

But out on the track, the WRX sedan pulls away in almost every test. In the 0-60 mph sprint, WRX comes in at 5.5 seconds versus 6.2 seconds for the Focus ST. WRX was half a second faster than the Ford around the figure eight, posting a lap time of 25.3 seconds. And out on the mountain road, the WRX does what it was bred to do.

Motor Trends Lieberman is impressed with the Focus ST’s “supercar-like turn in and says it’s just as precise and responsive as the McLaren 12C. But he says while its fun to drive, the Focus ST has a tendency to oversteer and has a slight torque steer in the corners while under full power.

Lieberman says the 2015 Subaru WRX is confidence inspiring, so much so that he powers through the canyon road without the Subaru's electronic aids, something he wasn’t comfortable doing in the Ford. This should be no surprise, because of the racing technology that goes into the WRX. Where he says the Subaru WRX falls short compared to the Ford is in the quality of the interior materials. He says it looks like an economy car. But he isn’t impressed with the comfort of the Recaro seats in the Focus ST either. Subaru has always fallen short in the WRX cabin as they put their focus on performance.

So which one is best to drive? Of course Motor Trend’s Jonny Lieberman thinks the all-new 2015 Subaru WRX is the best drivers car. He just felt more confident in the ability of the WRX. And why wouldn't he? The WRX is bred to race. Lieberman says the Focus ST is “fun to drive, but the WRX is even more fun to drive. The WRX feels like it’s a different class of car, but for the same money.”

It all goes back to the Subaru pedigree of rally race cars that Subaru has built for over 25 years. The WRX has deep roots that has shaped both the 2015 WRX and WRX STI performance cars. While this driver also thinks the Ford Focus St is a blast to drive, it doesn’t compare to the Subaru WRX for carving mountain canyons, gravel covered roads and tree-lined snow packed race courses.

Bert Medina wrote on January 29, 2014 - 8:48pm Permalink
So let me get this straight - same size and class of car, same size of engine, horsepower,price point and it's not a fair comparison? For the same money the WRX gives us better performance therefore the customer receives more bang for the buck. I see it as a fair fight, Ford just lost the fight although the ST is a prettying cool car as well. Sometimes you just have to take it like a man, make no excuses and come back stronger. My two cents.
Hector Garcia wrote on January 30, 2014 - 3:53pm Permalink
Actually I got my st at about 23,000 otd price. I was going to buy the wrx but they wouldn't even budge on the price. For about 7k less I do believe your getting more out of the ST.
James Bowman wrote on February 1, 2014 - 9:03pm Permalink
I think you are forgetting that the WRX starts at 26k, not 30k.