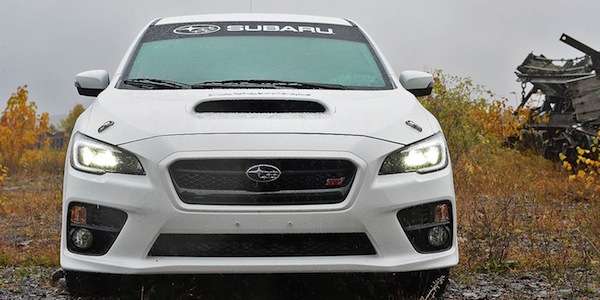 Sales of the new-generation 2015 Subaru WRX and WRX STI are hot here in the U.S., but buyers of the performance cars aren't happy. Subaru of America (SOA) reports sales of the WRX/STI, Forester, Outback, and XV Crosstrek were notably strong as each model line achieved its best October ever. But buyers of the new 2015 WRX/STI have to wait for their performance cars, where the other models are available for buyers to immediately drive them off the lot.

As we reported back in July, if you want a new-generation 2015 Subaru WRX or WRX STI performance sedan, you better be prepared to wait. It will require you putting in your order for the car you want, and then waiting at minimum 8-10 weeks for your car to be built and shipped from the Gunma Japan factory. And you won’t be able to take one for a test drive before you buy one because dealers don’t have any demos sitting in their showrooms.

Why such long waits for WRX/STI?

Unfortunately, Fuji Heavy Industries, maker of Subaru vehicles, doesn’t have the assembly line capacity to keep up with the record growth they are experiencing. SOA reported a 25 percent sales increase for October 2014, resulting in another monthly sales record. The company sold 43,012 vehicles in October 2014 versus 34,483 in October 2013. And Subaru has seen the YTD sales increase 20 percent with 418,497 vehicles sold versus 347,890 over the same period last year. 2015 WRX/STI sales are up 53.76 percent MTD and are up 35.09 percent YTD.

What is Subaru doing about the long waits?

It’s a good problem to have for the Japanese automaker as the company has now seen 35 consecutive months of year-over-year growth and is well on its way to its sixth successive annual sales record. SOA says they expect to surpass their 2013 annual sales record of 424,683 vehicles in the coming weeks. Subaru is in the process now of expanding their Indiana plant with a $400 million expansion to keep up with growing demand for the Subaru cars. They will also pick up needed assembly line space because Toyota will end their contract with Subaru to produce the Camry at the Indiana plant when the contract expires in 2016.

For now, if you want to buy a new-generation 2015 Subaru WRX or WRX STI, you will have to wait at least 8-10 weeks for your performance sedan to arrive here in the U.S. The waits will continue because of the record growth the brand is seeing month after month. Fuji Heavy is doing what they can to ramp up production, but the waits will likely continue until 2016.

Other 2015 Subaru WRX/STI stories of interest.
5 reasons you don’t want to buy the Subaru WRX but should choose the STI

mark wrote on November 5, 2014 - 8:17am Permalink
8-10 week wait? That kinda of wait time is the exception and clearly not the rule. Buyers have waited a 4 month average with 6 month waits no unheard of. Also, if you would read the forums about the wait times for these cars you would see that orders placed now are expecting 4-7 month wait times. Go to NASIOC or CLUB WRX forums and see for yourself. I was originally told 3 months with the knowledge it will absolutely not come any sooner. My car is "in transit" to the dealer and will hit the 4 month mark in a week. These wait times are country wide.
Doug wrote on November 5, 2014 - 10:00pm Permalink
I can't speak for the wait times on orders (though the dealership hinted that it would certainly be less than the 8-10 weeks mentioned here) however, I can comment on the ability to test drive. Maybe I got extremely lucky here, but I was able to test drive two separate WRXs at the two dealerships closest to me within a month of each other, no problem. Hoping to have mine by the end of the month.
Ty wrote on November 6, 2014 - 9:42am Permalink
I ordered mine in April this year and it took 5 months for me to get it... and it got here early at that. I gotta say I love the car and for those hating that haven't driven one yet. Give it a chance because ti will grow on you.
Sean wrote on November 7, 2014 - 1:57am Permalink
I must have been extremely lucky as well. I looked around at the Subaru dealers in my area, walked on the lot and left with a '15 WRX the same day. Two dealers had the exact car I was looking for with identical options, so there was more room to negotiate on price than I had anticipated.
Joey wrote on November 7, 2014 - 1:58am Permalink
This post title infers they aren't happy with the car. Good ol' clickbait. Mine took 7 weeks. The wait was tough- can definitely feel for those waiting longer. The car though is incredible and worth the wait.
SeanGotti wrote on November 7, 2014 - 2:13pm Permalink
The 2015 wrx is easily attainable at many dealerships. Its the STI that takes months.
Sean wrote on November 7, 2014 - 3:03pm Permalink
That makes sense. The first paragraph of this article makes it sound like both models are unavailable.
mark5racer wrote on November 7, 2014 - 3:13pm Permalink
I am waiting 4 months for my WRX. I live in Suffolk County, Long Island New York. There are 4 Subaru dealers here with zero cars. They have 7 total "in transit", all sold. Go to the Nasioc forums or Clubwrx forums and see the wait times for buyers. It is nuts! STI models are no different. In certain parts of the country are there exceptions, of course. But in no way the rule. People ordering their WRX's now have been told May would be their delivery date in many cases. Do not believe me hit the forums for yourselves. Nuff said.
stein wrote on November 8, 2014 - 3:10pm Permalink
Yep, put my order in on 8/7/2014 for a WRX and was told the first week of November at the earliest, I'm still waiting... After ready some of the comments here, I'm wonder if it will take another month or more :( Luckily my son has a 2012 which I can play with when I get impatient, like now.