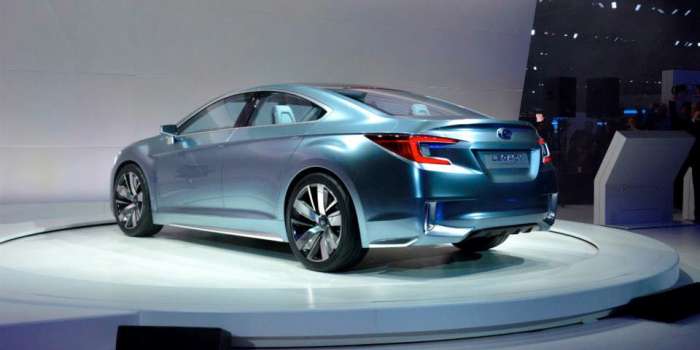 Is a 2015 Subaru Legacy hybrid in the works?

The 2015 Subaru Legacy sedan is coming next year and possibly with a new hybrid powertrain.
Advertisement

The 2015 Subaru Legacy concept was unveiled at the LA Auto Show 2013 with a new design but will it also be coming with a new hybrid powertrain? We know Subaru has already developed their own hybrid system in-house for the 2014 XV Crosstrek. As we reported yesterday, Subaru is looking to borrow Toyota’s hybrid technology for their future hybrid vehicles.

Subaru is looking to bring out more new hybrids beyond the new 2014 XV Crosstrek Hybrid that was just launched. When they do, they will need to increase fuel mileage in future hybrids to stay competitive. But if they do borrow the Prius technology, they will need to modify it to make it work with their all-wheel-drive Symmetrical layout. Muto went on to say, "We are now considering how we can adapt Toyota's system into Subaru vehicles in the future."

Subaru is in a good position because of having the Toyota hybrid technology at their disposal. When they unveiled the new 2015 Legacy concept last month in LA, all of the attention was focused on the exterior styling. Osamu Namba, General Manager of Subaru’s design department, talked about the future styling of the next-generation Legacy. The Subaru Legacy celebrates it’s 25th anniversary next year and it looks like Subaru has big plans for the anniversary model.

But while the new Legacy styling got all the attention at the show, Subaru never mentioned anything about the powertrain. Subaru is notorious for keeping their future plans quiet and the Legacy is no different. The next-generation Subaru Legacy is anticipated to to launch in late 2014 as a 2015 model. According to Motoring.com.au, the new flagship 2015 Legacy sedan will get a new economical hybrid version.

The biggest challenge for Subaru, will be how to adapt the efficient Toyota hybrid technology to their Symmetrical all-wheel-drive drivetrain in the Legacy sedan. Subaru will not depart from their multi-use vehicle market that made them successful. And it looks like Subaru engineers are hard at work figuring out how to make the Toyota technology work.

Look for the all-new next generation 2015 Legacy sedan to celebrated it’s 25th birthday with new exterior styling, and possibly a new hybrid model as well. Stay tuned to Torque News for the latest Subaru news.